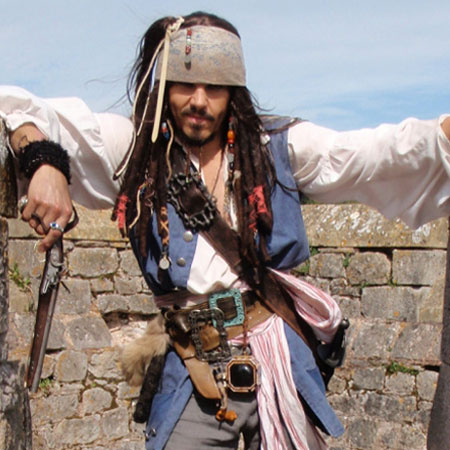 This act is one of the UK's most versatile Johnny Depp character impersonator/lookalike and you are hereby invited to enter a wonderland of pirates, scallywags, outlaws, villains, eccentrics and chocolatiers!  This act is much more than just a celebrity lookalike, he's an actalike and soundalike as well and can be accompanied by a veritable host of supporting characters.  Some of the wild and wonderful characters and events that can be organised for your entertainment include -

- Sail the seven seas with Captain Jack Sparrow from the fantastic Pirates of the Carribean movies!

- Throw the strangest tea party ever - hosted by The Mad Hatter!

- If you've a sweet tooth then it's the sweet truth that Mr Willy Wonka is the man you need!

- If it's a folk hero you're after then there's no-one more heroic than the inimitable Robin Hood. Just don't invite any rich Barons to your event, unless of course they're comfortable with a little wealth re-distribution!

- If you're in the mood to learn a little but you'd like to mix in a little excitement, then Dr What will raise the roof with his crazy experiments! Or he'll just blow your socks off. Education with added WOW!

Captain Jack has been a hugely popular Disney Character for Johnny Depp and Jack will continue to be perfect for any promotion or event. This lookalike is exceptional at the voice and mannerisms of Captain Jack Sparrow after portraying him for nearly 5 years and with very accurate costume and props, will have your guests believing that the real pirate himself is at your event.  He also holds a Level 1 Stage Combat qualification and is handy with a sword and dagger!