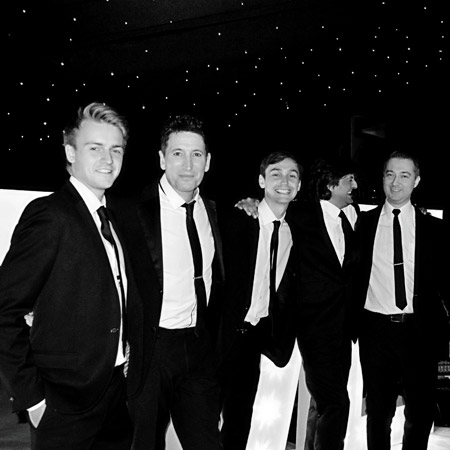 REASONS TO BOOK
Cover all era’s of jazz from 1920s - 1960s, bossa nova and Latin
Can also add a sprinkling of jazz-ed up swinging re-works of pop classics
A huge range of line ups to choose from, to appropriately suit your event
Provides superb over-dinner entertainment, wow-factor and broad appeal
Based in the UK and available to perform at events worldwide
Live Music and DJ, Jazz,Swing,Blues and Jive

Kevin is a multi-talented London born jazz singer/songwriter/bandleader with a charismatic stage presence, lauded by jazz critics for his innate sense of swing. His musicians are also world-class (described by Jazzwise Magazine, UK’s premier jazz authority as “the cream of UK straight-ahead jazz musicians) and are carefully selected for their experience working in the event/wedding/function sector at every level. Kevin has enjoyed sell-out shows with his band at world-famous Ronnie Scott’s, recently released a jazz album to critical acclaim, featured on Jazz FM in a live one hour concert, sings at some of UK’s best jazz clubs, appeared at several jazz festivals and headlined in Athens in concert with pioneers of Greek jazz scene, The Dimitris Kalantzis Quartet. He’s also entertained royalty twice and booked by many celebrities & sports stars for important private gigs.

Clients can choose from a huge repertoire from the American Songbook: everything from hot 20s jazz Charleston style, via 30s favourites, 40s swing and jive, 50s/60s swing and rat pack, right up to modern swing a la Michael Buble and modern cool jazz. By also adding a sprinkling of jazzed up swinging re-works of pop classics too, Kevin’s Jazz Swing Band makes the perfect group for weddings, parties or corporate events. For vintage-themes there’s the option for the band to change clothes to suit a different era in 2nd set, eg, 1st set 1920s jazz age, changing clothes to wear rat pack style for 2nd set. Kevin's Jazz Swing Band is particularly impressive just with piano and upright bass backing for more intimate events: perfect for wedding breakfasts, drinks receptions, garden parties and soirees – an appropriately entertaining finishing touch that will stay long in the memory of your guests.

" We are so pleased we had you at our wedding...LEGEND! "

" A brilliant sound by singer and band alike "

" We thank you from our hearts for a spectacular evening. Your voice is ‘flawless’ and unique with such a beautiful quality, effortless. The jazz musicians were also excellent – our wedding guests were equally captivated. "