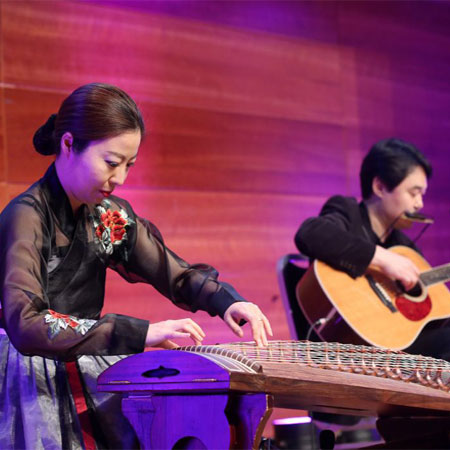 REASONS TO BOOK
Unique duo that play beautiful music on traditional instruments
Compose original songs based on Korean and Asian culture
Their music stands for a harmony between the East and the West
Songs are played on a Kayagum and the acoustic guitar
Based in London and available to perform at events worldwide
Other World Acts, World and Cultural Acts

Based in London, this unique Korean duo produces beautiful music on the Kayagum (traditional Korean harp) and the acoustic guitar.

Performing together since 2002 in Korea, the duo later moved to Europe in 2005 where they have performed at numerous corporate events, private parties, educational events and charity events.

Often invited to events to perform cultural music and represent Korea or Asia, they also stand for a harmony between the East and the West.

Their repertoire includes not only Korean traditional music but also their own compositions influenced by Korean spirits and various modern and Western music, such as classical and pop.