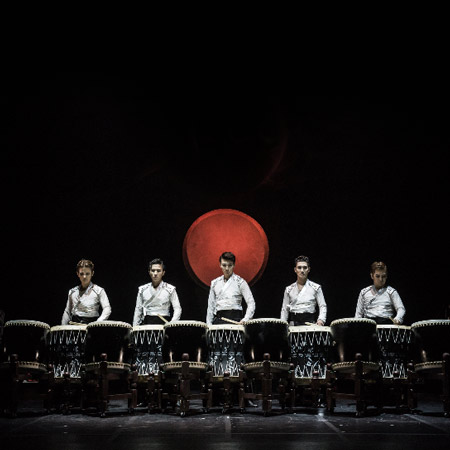 Our South Korea Drum Show is a dramatic and exciting culturally rich Korean drumming spectacle that has wowed audiences all over the world. Far more than your average drum show, this stunning act captivates audiences from start to finish with. It is both traditional and non-traditional Korean entertainment making it a truly unique experience for the guests.

The South Korea Drum Show is an exciting visual and musical spectacle with precise percussive patterns, astonishing choreographies, incredible costumes and an unprecedented stage energy that leaves viewers completely breathless. The Korean drumming act uses a mixture of gigantic traditional Korean drums and small percussion instruments they can walk around with. All this is combined with dance and martial arts. The show is similar to Japanese Taiko but more energetic and theatrical.

Based in Seoul, the South Korea Drum Show has reached critical acclaim due to their high calibre stage performances and has travelled to events, festivals and celebrations the world over. They have been to Spain, Morocco, Serbia, United Kingdom, Australia, New Zealand, Romania and more. They most recently took part on promotional activities for the 2018 Pyeongchang Olympics, received five star reviews for their Edinburgh Festival performances, invited to the 50th Anniversary of Singapore Independence and worked with large corporate clients such as 3M.

For clients seeking Korean entertainment, the South Korea Drum Show can provide a large scale drumming show with multiple performances or smaller displays. They have a fantastic range of stunning costumes and are guaranteed to impress audiences of all types.

If you would like to book this exhilarating Korean drumming show for your event, please speak to our Entertainment Experts.