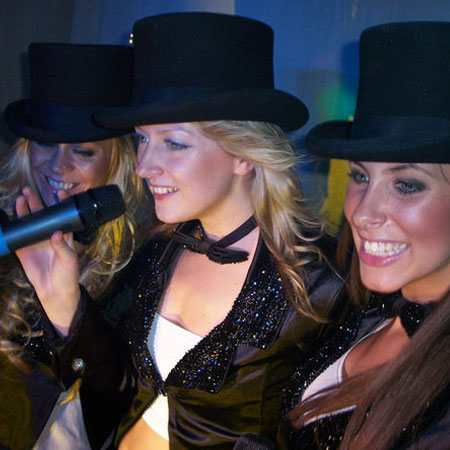 This internationally acclaimed group have been performing the professional circuit for 7 years and have performed at many corporate events, private parties and weddings across the UK and abroad. The band have brought their show to venues such as The Savoy and Madame Tussauds in London, The Sheraton Jumeirah Beach Resort in Dubai and The Park Hyatt Zurich in Switzerland.

They are available as a 3 or 6-piece band and are renowned for their vibrant energy, show stopping stage presence and flamboyant costumes.  They are an experienced and highly professional band who bring their audience to life, and up out of their seats, from the first number till the end of the night.

Recreating the sounds of some of the greatest hits of our time, from the 60s right through to the present day.  Lady Marmalade are also available with Pop Princess Tributes including Kylie, Britney, Lady Gaga, Christina Aguilera and Amy Winehouse, followed by Party sets.

With a fantastic set including songs to make your heart and soul get into the party mood, and your feet onto that dance floor!

To book this act, please contact our team at Scarlett Entertainment.

" The party band were fantastic and truly set the mood for the evening. Everybody loved them! The event was a fabulous success with the French theme getting everyone in the mood to party! We estimate funds raised on the night to be £6000, and your part in raising this amount is very much appreciated. Thank you once more. "

" The band were absolutely excellent. The dance floor was full, everyone commented on how brilliant they were - really enjoyable and would recommend them. Thanks for all your help. "

" We wanted to let you know that the band was excellent, perfect for the event and all our guests have been raving about them. Also they were very flexible in terms of arriving early to set up. We would highly recommend them. Many thanks for your recommendation. "

" I would just like to say a big thank you for making our Xmas party a roaring success. You were completely right for our do. You were flexible, approachable and funny and would highly recommend you for any type of do that needs to go with a bang!! Thank you! "

" A big thank you for your wonderful show that kept us all dancing with such happiness until the wee hours. You made the evening so completely fun. We have had lots of lovely letters and cards from our guests telling us what a good time they had and how much they enjoyed your singing and the choice of music. Thank you! "