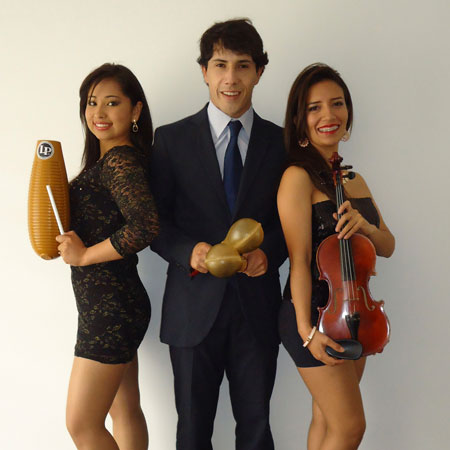 REASONS TO BOOK
Professional and versatile musicians with wide musical experience
All acoustic songs played are high quality, live and original
Their repertoire includes tango, bolero, bossa nova, samba & more
Lead singer Leidy has made vocal recordings for radio and television
Based in Colombia and available to perform at events worldwide
World and Cultural Acts, Latin and Salsa Music, Latin and Salsa, Live Music and DJ

This Latin American Trio was formed by professional and versatile musicians from Colombia with a very wide experience making music from all Latin American popular genres such as tango, bolero, bossa nova, samba, Cuban son and more.

Lead singer, Leidy has been singing since she was 5 years old. She has a soprano voice with versatility that ranges from classical to standard jazz and popular music. She has participated in several symphonic orchestras and concerts, made vocal recordings for radio and television and won an award in an important vocal competition at the Colombian Song Festival in 2011.

The trio alternate between music with vocals and instrumental music, their format is acoustic; everything played is high quality, live and original. They do not use any backings tracks or sampling.

The group have performed at hundreds of venues including recitals, concerts, social and corporate events.