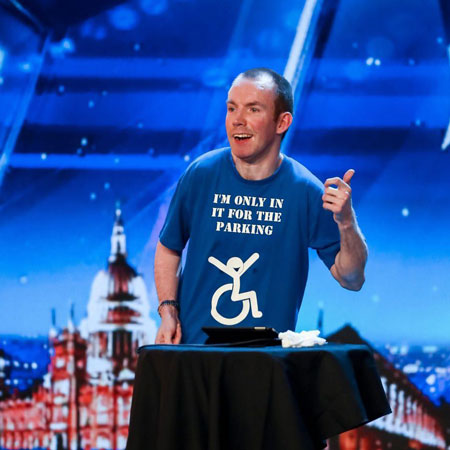 REASONS TO BOOK
2018 Britain’s Got Talent Winner, Lost Voice Guy
Lee Ridley is renowned for being both very funny and completely unique as the fist comedian to use a communication aid
His stand up comedy overs a breadth of topics from roasting the political establishment to the country’s welfare system
Has told jokes and given motivational speeches for a range of charities and organisations including Barclays, Scope and The Royal College of Nurses
Based in the UK, Lost Voice Guy is available for bookings nationwide
Comedy Act, Leadership and Motivation Speakers, Speakers and Hosts, TV Show Talent Acts, Speciality and Novelty Acts, Talent and TV Show Personalities

Lee Ridley AKA Lost Voice Guy may not be able to talk, but he definitely has something to say, and his comedy will leave you speechless. He has gained a reputation for being both very funny and completely unique, and been described as “a wonderful comedian” by Little Britain’s Matt Lucas.

Lost Voice Guy won the BBC New Comedy Award 2014 and this summer scooped the prestigious winner Britain’s Got Talent in 2018. He was the first comic ever to win the show, and when he took to the stage, he delivered one of the most hilarious stand-up routines the show has ever seen.

The Newcastle funnyman, whose cerebral palsy affects his ability to speak, is the first stand up comedian to use a communication aid. Right from the start of the ITV competition, which is the networks highest rated entertainment show, Lost Voice Guy impressed and entertained with his comedy routines, spoken entirely through an iPad app. In order to perform, Ridley uses a speech synthesiser upon which he programs his material before selecting certain lines based on audience reaction.

While disability and living with cerebral palsy are central themes to his act, Ridley’s stand-up covers a breadth of topics from roasting the political establishment to the country’s welfare system. He has performed in a corporate setting for Barclays, The Royal College of Nursing, Exeter University, Leeds Jewish Welfare Board, The Royal College of Occupational Therapists, the BBC (internal), Scope, Motability, Communication Matters and several branches of the NHS.

Lee has told jokes/given motivational speeches for a range of charities and organisations including Barclays, Scope and The Royal College of Nurses. He is also a patron of Smile For Life, Find A Voice, Communication Matters and The Sequal Trust.

To book Lee Ridley AKA Lost Voice Guy, get in touch with our team, or discover more of our fantastic stand-up comedians.

" The funniest comedian at the Edinburgh Fringe. His banter with the audience is one of the best I have witnessed "