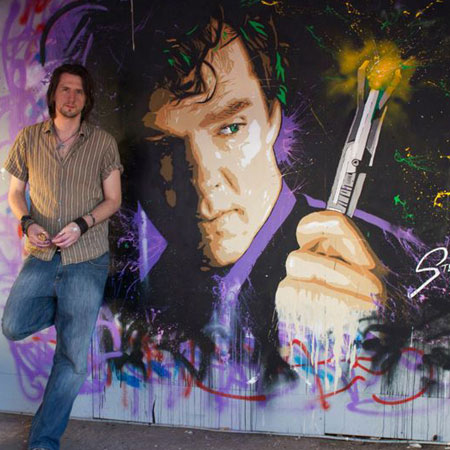 REASONS TO BOOK
Internationally recognised, contemporary live event artist
He has attracted over 500,000 views on YouTube, whom he has now partnered
Articles on his art and art theory have featured in various local magazines
His painting videos have featured on Sky's TV BBC websites
Based in Bristol and available to play at events worldwide
Art Based Entertainment, Graffiti Artist, Street Artist and 3D Art

Live Street Artist, Stephen represents contemporary culture via pop art; he embraces materialistic nature, which he believes, often defines who we are. Throughout his art career, Stephen has had a fascination with what makes an icon, a celebrity, a hero, and if these people even have to be real.

Stephen trained in Bristol and set up his own art and film studio after his studies which has been based in South West  Devon. He is an internationally collected artist with collectors all around Europe and America and as far a field as Australia and Japan. High profile projects have included his artwork for the stage production of Mojo Mickeybo on London's West End. Articles on his art and art theory have featured in various local magazines including Devon Life, Plymouth Life, Home and Garden and Exeter Flying post.

His painting videos have featured on Sky's Oops TV, and the web sites of the BBC, Adam and Joe, GameSpot UK and 30 Seconds To Mars. These videos have brought him massive exposure and a wide fan base; they have attracted over 500,000 views on YouTube, to whom he is now a partner with.

He is a great entertainment option for corporate events, product launches, festivals and parties.