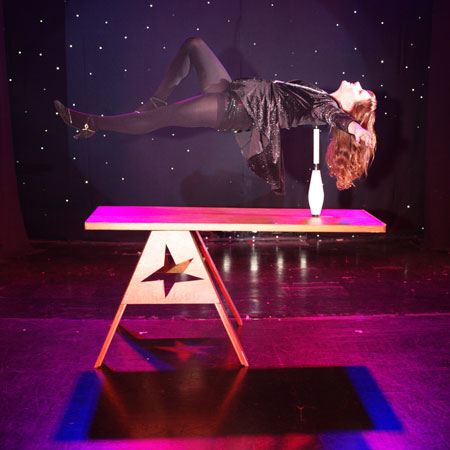 REASONS TO BOOK
A fast paced mix of magic, illusions, juggling, escapology and music
Leaves your guests feeling amazed, puzzled but above all entertained
Can tailor shows to provide close up magic to a full stage production
Represented the UK in the FISM world championships in 2012
Based in the UK and available to perform at events worldwide
Magic Stage Show, Magic and Illusion Show, Cabaret Shows, Magic and Illusion, Cabaret and Stage Shows

Magic, Illusion and Circus show is a fun filled performance suitable for all of the family!

The show presents a fast paced mix of magic, illusions, juggling, escapology and music delivered in a way to leave your guests feeling amazed, puzzled and even scared, but above all entertained.

Established in 2004, Michael and his team of variety entertainers perform a captivating mix of circus style skills, close up magic shows, street style performances, cabaret style shows and much more.

They have performed to audiences of well over 3,500 people at prestige venues including, The Boston Plaza Hotel, USA, Blackpool Opera House, Disneyland Paris and many theatres across the UK.

In 2009 they were awarded best event at Buxton fringe Festival with their show “Deliverance” and in 2010 they were nominated for best Family event with their show “Misdirected”. The following year, Magic, Illusion & Circus Show were also placed 2nd in the European FISM championships in Blackpool and went on to represent the UK in the FISM world championships 2012.

Available to hire for a range of events, the performers can tailor their shows to provide the perfect entertainment for you. Whether that be quirky walk about stilt characters, a close up magic show for a drinks reception or full production stage show for after dinner entertainment.