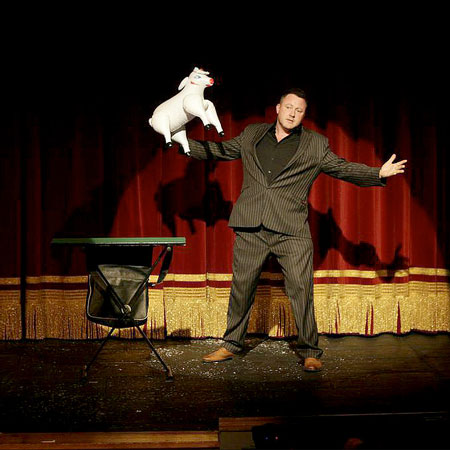 One of the world’s most revered and experienced magicians, our magician and comedy performer offers the elite of magic stage shows.

Even impressing Her Majesty The Queen at a Windsor castle Christmas party, our magician and comedy performer has entertained the British royal family at a number of events, as well as performing for King Carlos of Spain and the Dubai Royal Family.

Effortlessly blending excellent sleight of hand with hilarious stand-up comedy entertainment, our illusionist comedian is guaranteed to be a hit with all audiences.

Starting out his career in London’s Covent Garden, our comedian honed his magic tricks and comedy entertainment in front of street theatre audiences before becoming an internationally acclaimed magician and comedy performer.

Having established his craft, our comedian has taken his magic tricks to audiences across the globe, performing at some of the world’s most prestigious venues including the Rusutsu Resort Hotel in Hokkaido, Japan, and the LA Country Club in Beverly Hills.

Equally at home entertaining a small dinner party or a packed-out theatre in London’s West End, no job is too small or too big for our magician.

A favourite of A-list celebrities including Sir Paul McCartney, Dustin Hoffman, Demi Moore, and Jools Holland, our comedian has also performed to enraptured guests of BMW, Louis Vuitton, and Emirates among many, many more.

Our magician and comedy performer is just one of the fantastic illusionists we hold on our extensive roster. Discover the other magic stage shows and close up magicians we have on our books.

To hire this incredible performer of magic tricks and comedy entertainment, get in touch with our dedicated team of Entertainment Experts.

" So you are the conjurer "

Her Majesty The Queen

" You amaze me every time "