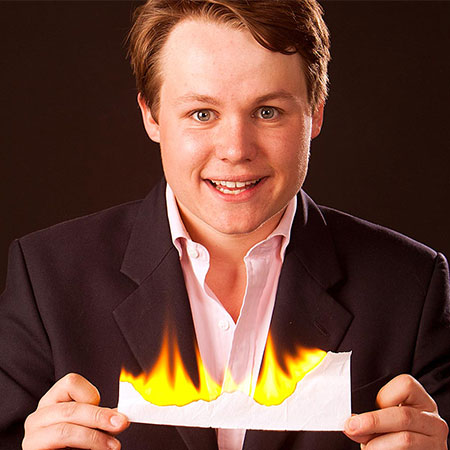 REASONS TO BOOK
Accomplished magician and talented hypnotist offers comedy strolling magic performances
Can perform mind-blowing magic tricks with cards, coins, notes, ropes and any other everyday object
Can roam around your venue blowing your guests’ away and bringing smiles to their faces
Has performed for every living prime minister and famous personalities such as Prince William and Ellie Goulding
Hire magician and hypnotist for events in the UK and worldwide
Walkabout Entertainment, Magicians and Mind Readers, Close up Magician, Hypnotist , Magic and Illusion, Comedy Magician

Our Magician and Hypnotist Archie not only captivates audiences with his boundless talent and mind-blowing magic tricks, but also with his charming personality and playful style. This talented strolling magician has a unique way to entertain guests at parties and bring smiles to their faces.

This close up magic performer became interested in magic at an early age when his grandmother gave him a magic-set when he was 4 years old. When he was 12, he was asked to start performing professionally. At 18, he joined the Magic Circle, the world’s premier magic society dedicated to promoting the art of magic.

This friendly mix and mingle magician can roam around your venue amazing guests and leaving them wide-eyed. His comedy strolling magic performances are fully interactive, so he always asks people for help to do his magic. Some of the tricks our talented strolling magician can perform include levitation of objects, tricks with cards, notes, coins and ropes and any other everyday objects.

This skilled hypnotist’s talent and potential was spotted by TV producers, who offered him his own TV show on E4, a new Channel 4 special called ‘Look Into My Eyes’.

Archie has performed for deluxe guests at private parties and events worldwide, including prominent personalities in the sphere of culture, entertainment and politics such as David Cameron, Theresa May, Prince William and Ellie Goulding. In fact, he has performed his comedy stroll magic show for every living prime minister.

Scarlett Entertainment offers a variety of magicians and comedy magic shows for events and parties all around the world.

If you would like to hire Magician and Hypnotist Archie, then contact our in-house team of entertainment experts today and request further information on his comedy strolling magic performances. They will be happy to assist you in the booking process.