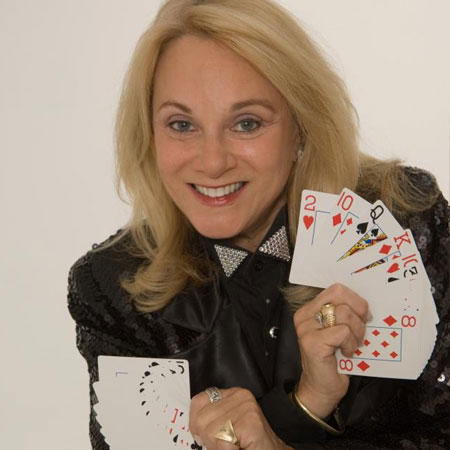 This charismatic, multi-talented New York Magician is always in high demand, because Madeleine's magic shows are not only impressive, alluring, exciting, intriguing, involving, engaging and fun but also appealing and appropriate to everyone. Madeleine is a rare breed of magician in that her magic shows, whether they are held in a small private setting or in a large public setting, are always perfect for the group for which she performs. If the magic show is for a small or large birthday party for young kids or older kids or teenaged kids, it will be age appropriate and perfect. If the show is for adults or for a corporate party or event, large or small, the magic and tricks will be sophisticated, engaging, mesmerizing and again, perfect. And when she performs on the adult level, she always includes her astounding card magic and mentalism.

At all adult and corporate parties that do not require her engaging, mesmerizing, mind-boggling Walk-Around and Close-Up Magic, Madeleine will perform her full Magic Shows which include her incredible Live Dove productions, audience participation, mentalism, illusions and more.  The entertainment she provides for corporate events all around NYC, the Tri-State area and beyond is sophisticated, magnetic, exciting, and engaging. She has already covered events for renowned companies such as Prudential Douglas Elliman, and from the feedback she has received, her performance never falters.

She has also performed for religious foundations, schools and major corporations such as American Express, A&E Television, FAO Schwartz, Coca Cola, Warner Bros. and many more. In addition her magic has been performed on many other major television stations such as WNBC-TV, WABC-TV, WCBS-TV, PAX-TV and OXYGEN. MTM has also been requested to perform for many of the famous celebrities. When J.K. Rowling makes her special appearance for the Borders Books Harry Potter Event, Madeleine was specifically requested to perform. When Barnes & Noble had their annual Harry Potter Event, they too requested Madeleine.