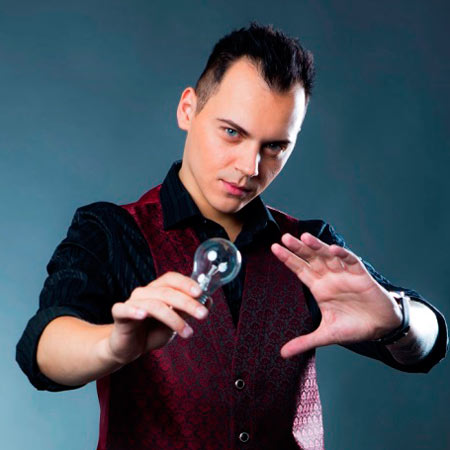 This magician is one of Lithuania’s rising stars and the country’s most exciting mentalist talent. Our talented and charismatic mentalist magician promises to deliver s show full of spectacle, mystery and tricks that have to be seen to be believed. This original, high octane magic show combines classic magic elements such as card tricks, sleight of hand, illusion and mentalism in new and exciting ways to create a fresh and engaging magic show. This superb magic entertainment has amazed and baffled audiences for Bentley Motors, IKEA and many more, and has even won the admiration of legendary mentalist Uri Geller!

Our mentalist performs tricks and illusions that will have audiences convinced he can look directly into their minds. Audiences will be blown away as his telepathic and psychic skills read their thoughts and correctly guess the nature of hidden objects time and time again.  This magic show will have people talking for days as they try to figure out how he does it. You can also expect to see mind-blowing displays of sleight of hand as seemingly impossible card tricks and illusions are made to look easy.

No magic entertainment would be complete without a sense of danger and our daring magician rises to the challenge with death defying escape tricks that will have audiences on the edge of their seat. Our magicians wry use of humour and levity throughout his show adds another element to his impressive magic show for a superbly entertaining magic show. This versatile and diverse magician delivers the full range of magic in his breathtaking show and is guaranteed to give your audience something they’ve never seen before.  Our mentalist magician has already wowed audiences across Lithuania and made spectacular appearances on national TV.

Scarlett Entertainment is the home for the most original and awe inspiring magic, illusion and mentalist performers in the world. Contact our helpful team and let us find the right act for your event.

" This is simply mind-blowing "