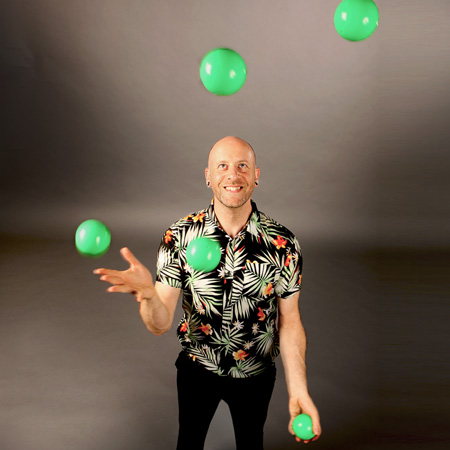 REASONS TO BOOK
The modern roaming juggler will engage your guests with sparkling conversation and incredible juggling tricks
He has provided circus entertainment for events around the world for clients such as Barclays, BP, The National Theatre, Nintendo and more
With hypnotic juggling tricks and an eccentric personality, he provides a modern take on a traditional juggling act
Perfect juggling act for private parties, corporate events and festivals
This walkabout circus entertainer is based in the UK and available for worldwide events
Jugglers and Diablo, Circus Entertainment, Juggling and Diablo Act, Walkabout Entertainment

The modern roaming juggler will engage your guests with sparkling conversation and incredible juggling tricks.

Our walkabout circus entertainer has been juggling professionally for over twenty years, having trained at some of the best circus schools in the world, his juggling act has it all!

Providing Circus Entertainment for Events Around the World

Circus has led our walkabout circus entertainer around the world and back again. He graduated from London's National Centre for Circus Arts with flying colours, as well as from the Kiev State college for Circus and Variety Arts, under the watchful eyes of the former head of the Soviet Union Sports Acrobatics Association.

Since then he has provided circus entertainment for events around the globe, from grand operas, theatre productions, circuses, to weddings, parties and for corporate clients such as John Lewis, Nintendo, China Airlines and BP.

A Modern Take on a Traditional Juggling Act

Dressed to impress, our modern roaming juggler will engage your guests in conversation with a good dose of humour and eccentricity, whilst performing unbelievable juggling tricks that add a unique and modern element to a traditional juggling act.  He can also perform with LED glow juggling balls in his glow juggling act that is a perfect addition to nighttime events.

With a skilful mix of hypnotic glow juggling and an intriguingly eccentric personality, he will adapt his juggling acts to suit each occasion, adding excitement, humour and peculiarity to any kind of event.  Book him and your party will really come to life!

To hire circus entertainment for events in the UK as well as the rest of the world, contact our team of entertainment specialists today.