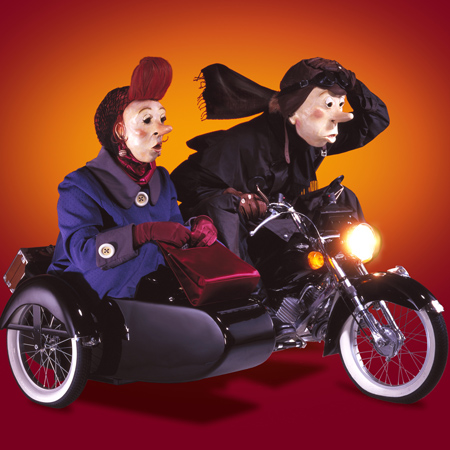 Are you planning an outdoor event or looking for street entertainment? Festival, town fete or cultural celebration? Are you looking for a roaming act that guarantees to grab your audience’s attention and actively get them involved in an interactive performance? Look no further as our professional duo from Amsterdam are experts at creating unusual entertainment that turns heads wherever it goes.

The unusual entertainment from our cartoon character motorcycle couple is a fantastic interactive performance combined with a fascinating roaming act. The eccentric motorcycle couple pull up on their motorbike and proceed to act out one of a series of micro-plays. From pretending to be broken down and asking audience members to give them a push to acting out domestic disagreements. Afterwards, they hop back on the motorbike and head off to the next performance area.

This motorcycle couple's unusual entertainment is endearing, quirky and comical at the same time. The cartoon characters are so striking that they will never pass unnoticed!

The roaming act can be booked as street entertainment on festivals and for numerous outdoor events within a driving distance of Amsterdam.

Our motorcycle couple is ready to wow audiences so do not hesitate to contact us about booking them for your event.