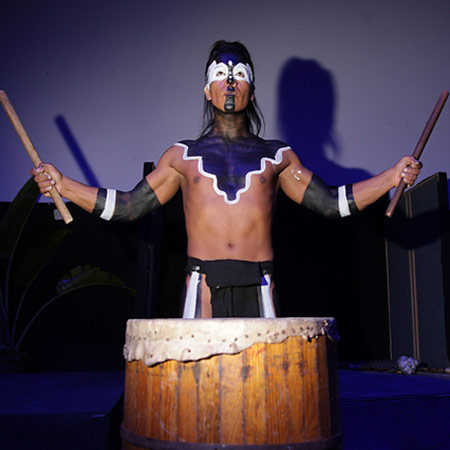 REASONS TO BOOK
A dramatic contemporary expression of ancient traditional ceremonial ways
Theatrical musical performances combined with creative expression
The group work to inspire respect and change for a better earth
Share the ancient Native American philosophy with people of the world
Based in New York and available to perform at events worldwide
World and Cultural Acts, American , Drumming and Percussion, Live Music and DJ

Native American Dancing Drumming Group is an all-original group, whose performances are considered to be a contemporary expression of ancient traditional ceremonial ways.

Their vision is for mankind to return to living in sync with nature by sharing the Ancient Native American philosophy and way of life with the people of the world.

The troupe’s mission is to inspire respect and change for a better earth through fascinating and dramatic ceremonial dances, honouring the elements of life and sharing the knowledge of the ancestors with the people, through theatrical musical performance, and creative expression.

Their performances are a celebration of life, in tune with the natural flow of energy and harmony with the universe, asking people to challenge themselves and move away from oppressive thought patterns and overindulgent behavior.

The group believe that modern technology has altered the natural flow and balance of the earth and that the magic of the universe has been suppressed and created destruction to our mother earth.

The dancers play the drums as they dance and the choreography varies depending on the theme of the piece. Although the dance and acrobatic movement is focused around the drum, there are other numbers that consist of ceremonial style dance and music.

A completely unique show, not to be missed, great for corporate events, themed entertainment and more.