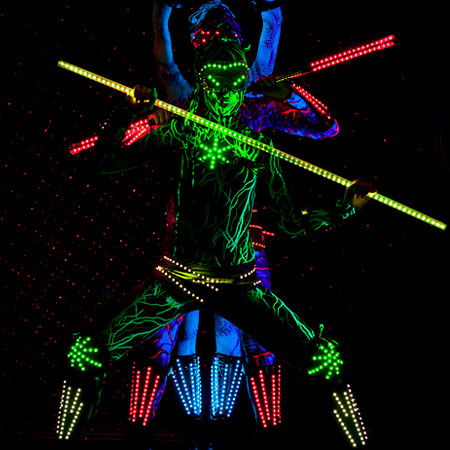 Designed to inspire and amaze audiences, this Neon show is the ideal entertainment option for those looking for serious ‘wow factor’.  Based in Moscow the show is a real spectacle of music, dance and light that optimally interact with each other.  The light show includes 2 – 3 original numbers, using various RGB and LED props and the elements of juggling, acrobatics and choreography.  It is also possible to have a duet performance and a program consisting of 6 artists in LED costumes.

Perfect for corporate events and product launches where clients want to create a unique visual spectacle and a lasting impression for guests!  This amazing neon show is has been booked internationally in UAE, Qatar, Oman, Hong Kong, Singapore, UK, France, Italy and in more than 30 cities throughout Russia.  A selection of their previous high profile corporate clients include Mercedes-Benz, House of Fraser, Elle, Land Rover, McLaren, Red Bull, RBS, BP and Adidas.

Cyber Drum Show
At present there are no similar projects in Russia. Percussion being combined with the LED light is in high demand at clubs and corporate events in Moscow and Russia.

The uniqueness of the Cyber drum Show is the unusual LED costumes of the drummers. Each light musical instrument does not only enliven the LED glow of the costumes of the musicians, but also manages a complex electronic cyber-costume of a dancer. This creates an extraordinary combination of sound and light.