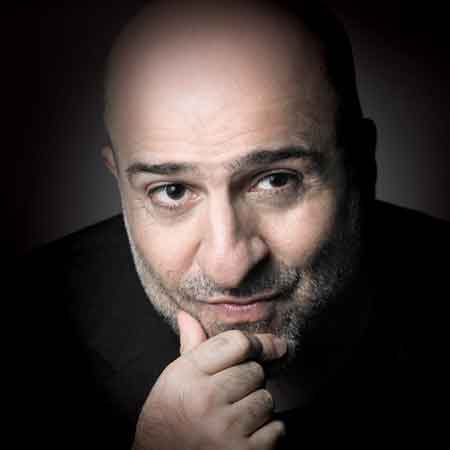 REASONS TO BOOK
Multi-award winning stand-up comedian, actor, writer and producer seen on British TV and Blockbuster films
Has a career in comedy that spans more than 30 years and is recognisable all over the world
An adept and entertaining host and presenter, in demand for awards ceremonies and corporate events
Witty comedy material explores the diversity of modern Britain and can be made corporate-friendly
This industry professional has a lot to offer with a vast range of experience in many sectors
Speakers and Hosts, After Dinner and Comedy Hosts

Born in Kensington London, Omid Djalili is a British-Iranian multi-award winning stand-up comedian, actor, writer and producer.
As a stand-up comedian, Omid has performed internationally since his 1995 Edinburgh Festival Fringe show Short, Fat Kebab Shop Owner's Son and was a Perrier Award nominee in 2002 for the first and only hour-long 9/11 themed comedy show in the world at the time.

Throughout 2016-2019, his most recent stand up show Schmuck for A Night saw him perform 250 dates across the UK and worldwide.  On the stage, Omid won rave reviews for his leading role of ‘Tevye’ in Chichester Theatre Festival Theatre’s Fiddler on the Roof in the summer of 2017.  Omid also starred as ‘Fagin’ in Cameron Mackintosh’s West End revival of Oliver! at Drury Lane in 2009.

Earning praise across the world for his performances, Omid has starred in films such as the recent smash hit Mamma Mia: Here We Go Again, the Golden Globe and Oscar nominated Shaun the Sheep Movie, the Oscar winning Gladiator, Sex and The City 2, The Mummy and The Infidel. Other films include Sex and the City 2, Mr Nice, Grow Your Own, Over the Hedge, Casanova, Modigliani, Sky Captain and the World of Tomorrow, The Calcium Kid, Anita & Me, Mean Machine and Spygame.

On TV, Omid was part of the 2018 line-up for ITV’s We Are Most Amused and Amazed, a televised celebration for The Prince of Wales’ 70th Birthday. He has also recently filmed for roles in Acorn TV’s Queens of Mystery and BBC One/HBO’s His Dark Materials, a TV adaptation of the Philip Pullman novels. Other notable TV credits include his own BBC One show The Omid Djalili Show, co-starring in Whoopi Goldberg’s NBC sitcom Whoopi and with James Nesbitt in Stan Lee's Lucky Man on SKY. He also recently appeared in Comic Relief’s Celebrity Apprentice, just finished filming a brand new Netflix Global drama Letter For The King and is currently filming a second series of His Dark Materials

Omid executive produced the acclaimed 2015 documentary We Are Many about the global anti-war demonstrations that took place in 800 cities on February 15th 2003, to date the largest mobilisation of human beings in the history of the earth.

In August 2016, Omid produced an Edinburgh Fringe show called Iraq Out & Loud which saw almost 1444 comedians and members of the public read the entirety of the Chilcot Report for 24 hours a day, over 12 days. This memorable production was awarded the prestigious Panel Prize at Edinburgh Comedy Awards.

Contact us if you would like to book Omid to appear as a presenter or host at your event.