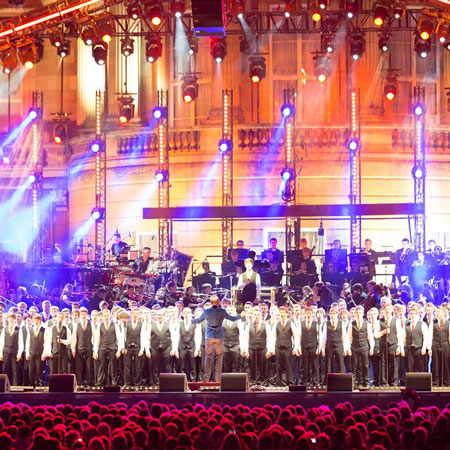 REASONS TO BOOK
Immense all-boys choir from wales featuring well over 200 singers all aged between 11 and 19
Finished third place on Britain’s Got Talent back in 2012 resulting in huge online presence and millions of YouTube views
Appeared at Buckingham Palace, and the Millennium Stadium in Cardiff for the Ryder Cup Welcome to Wales concert
TV Appearances include This Morning, the X Factor final, Songs Of Praise, Who Wants To Be A Millionaire and more
Based in Wales, the all-boys choir is available for events all over the world
TV Show Talent Acts, Talent and TV Show Personalities, Live Music and DJ, Choirs - Gospel and Barbershop Quartets

Since its formation eight years ago by Tim Rhys-Evans, the inspirational music director behind renowned male choir Only Men Aloud, Only Boys Aloud has offered once-in-a-lifetime opportunities to hundreds of boys across South Wales to perform on platforms large and small across the UK, as well as numerous TV appearances and recordings. With 10 choirs covering the whole of South Wales, and another four choirs launched last year across North Wales, word of this phenomenon has spread throughout the globe.

The boys’ Britain’s Got Talent audition clip has had well over 26 million views on YouTube and has messages posted almost daily on their website from around the world. Created for a one-off concert in 2010, Only Boys Aloud has gone from strength to strength, gaining a momentous third place in Britain’s Got Talent in 2012, performing at Buckingham Palace in 2013 to celebrate the anniversary of the coronation, singing in the X Factor final and much, much more including appearances on many national UK TV shows.

Only Boys Aloud's charitable foundation working for the community

Inclusivity is central to the scheme. There are no fees to take part. No auditions. Any boy aged 13-19 who commits to attending regularly at their local rehearsal is welcomed whatever their background or ability. At its heart, the scheme aims to make a difference to the young men of Wales and help raise aspiration levels, self-esteem and confidence. OBA is one of the main activities managed by The ALOUD Charity, formed in 2012 to secure the future of this extraordinary, life-changing project.

Book the Only Boys Aloud choir for your event

If you would like to book the all-boys choir for an event, get in touch with us today. They offer tailorable line-ups suited to your event from 200 singers to just 32 and less on special request.