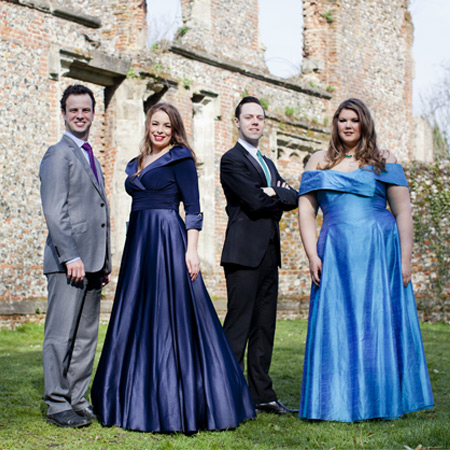 This popular Opera Group and are in high demand for their opera show, Christmas carols and opera flash mob packages at events around the UK. The group enjoy singing classical favorites and their own four-part arrangements of songs such as Nessun Dorma, Hallelujah and Coldplay's Fix You.

The band members have all studied individually at the UK’s leading music conservatories and are now working as soloists with national opera companies in the UK and abroad.They are a young ensemble who offer a powerful and rich operatic sound to any piece, whilst always focusing on classy presentation; they always add a real touch of glamour and spectacle to any event.

Formed in 2013 when the group performed for celebrities from BBC’s Strictly Come Dancing at a large celebrity ‘Winter Wonderland’ event in London, they have also performed at a wrap party for Warner Bros and Films at the Langham Hotel in London. They are already booked for dates in 2015, their opera dinners for the prestigious Grimsdyke Hotel in Hertfordshire are growing in popularity and they have asked them to perform again at the Winter Wonderland Ball.

As of the members have performed individually for the Prime Minister at the House of Lords, Lord and Lady Sainsbury’s wedding, Heritage Titanic Recitals, BBC Proms, Songs of Praise, BBC Radio and Radio Scotland broadcasts, have sung the Welsh National Anthem for Cardiff Devils Ice Hockey Team and have sung at various established music venues around the UK such as the Royal Albert Hall, Wigmore Hall, Barbican and Southbank Centre.

" I didn't know opera could be so entertaining...the Italian food was delicious and I even had a personal serenade from one of the singers at my table...a true delight for the senses! "

" When singing Jeff Buckley's Hallelujah...You could hear a pin drop...it was like there was electricity in the air! "

" A group of unspeakable talent "