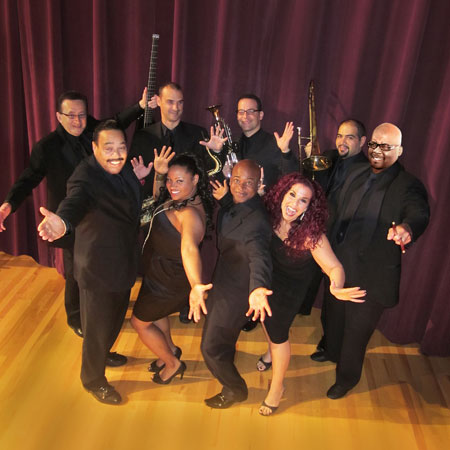 This high energy interactive band has been keeping everyone dancing for many years at some of the most important corporate & social events in Florida. For decades, they covered all styles of music favourites from standards to hip hop, and the band is bilingual too. Their mega song list gives your guests plenty of choices for a well rounded evening of fun that every age can enjoy.

The band is recommended at most five star hotels in Florida and is in high demand for Corporate events, Weddings, and Charity Gala's. A Wedding, Convention, or Charity fundraiser demands that the entertainment appeal to all ages for a successful affair.  This band does it better than most.

For your next event, be sure to keep our name handy. When you only have one chance to get it right, why take a chance at all.  This band knows how to keep your party moving and your dance floor overflowing.

" Take a deep, well-deserved bow for your starring role in the formal inauguration of the Broward Center for the Performing Arts. Without you in the "cast", the Foundation's March 3rd opening could not have been the elegant and memorable occasion that it was. To say you came through when called upon is possibly the understatement of the century...it was a first-class performance on your part -- handled as only a professional can. We weren't worried about you for one minute. Bravo! "

" This letter is an expression of our appreciation for the wonderful music that you provided for the Miami City Ballet's opening event in Ft. Lauderdale. Your music was very much enjoyed by all present. We heard only the most positive comments and compliments. "

" On behalf of the trustees, artists, and staff of the Miami City Ballet, I would like to thank you for your outstanding work in making the "Nutcracker Magic" dinner dance celebration a most elegant success. You have an excellent group of musicians whose talents inspired everyone to dance at the event. "

" Just a note of thanks and to tell you that Marti and I and our guests aboard the SUN DREAM thoroughly enjoyed the fine music. Thanks for making my special night more perfect. "