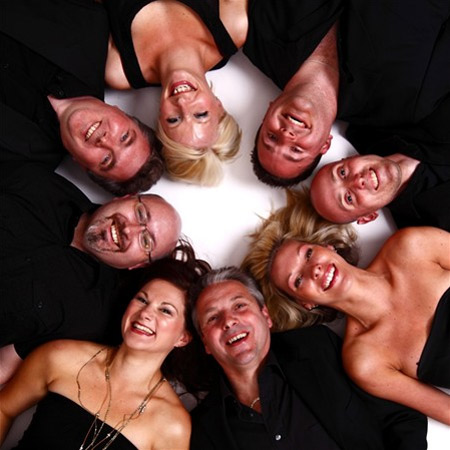 REASONS TO BOOK
Versatile & talented musicians - stunning show both musically & visually
Featuring some of the finest singers in the South West of England
Can peform at small informal parties to large corporate events & weddings
Huge repertoire including music from the 1960's to the present
Based in Exeter, Devon and available to perform all around the UK
Live Music and DJ, Cover Bands

Formed in 1997, Party Band LTD have a wealth of experience in providing entertainment for a wide range of events, clients and venues from small informal parties to large corporate functions and weddings throughout the UK and beyond.

The band features versatile and talented musicians who are dedicated to providing exciting and accomplished musical performances. Whatever situation you book the group for, their focus is always on entertaining you and your guests with a stunning show both musically and visually.

Selecting music from the 60's to the present, the band plays a remarkably wide range of material with the aim of giving their audiences as balanced a selection as possible.

" We had an amazing time thanks to all of you, you made our wedding and everyone is talking about how amazing you all were! Everyone there danced from the minute you started till the moment you packed up!!! We want to do it all again !!! Thank you so much!!! "

" A spectacular group of entertainers. They stole the show at our open air concert at Bicton Gardens on 9th July 2009. Many people have commented on their amazing show.The band are all very talented musicians and the vocalists have tremendous voices …put that together and you have the recipe for a fantastic night out.I highly recommend them for any event …if you book them you will not be disappointed!We were so impressed with their superb performance at Bicton that we have booked them to entertain at our Summer Caribbean Ball at Sandy Park on Saturday 19th June 2010. "

" A fantastic band. The girls brought a familiar and upbeat feel to our friends wedding, helping everyone to let their hair down and have a lot of fun.They are charismatic and very talented, doing covers of all our favourite tracks. Their stage presence and ability to have a lot of fun meant all the guests did exactly the same.The wedding reception just got better and better with every track the girls played. It was a wonderful evening. "

" The band was recommended to me for my 50th Birthday Party held at the Southgate Hotel in Exeter which was a black tie affair for 85 guests.I wanted some live music from a band that would get the party swinging and they certainly achieved that. The girls looked fantastic and were very popular with the male guests particularly with all the costume changes! The band sounded great and made this a very memorable occasion for me. Everyone was dancing and the feedback was very positive from my friends and family.I would highly recommend them. "

" On behalf of the mess president and mess members of RNAS Yeovilton warrant officers and senior rates mess I write to express my sincere thanks to you for the outstanding entertainment the Band provided for the summer ball. I have received many positive comments from the mess members who were in attendance, who praised the quality and professionalism of the band.I look forward to working with you again and I would have no hesitation in recommending the Band to other Military units.Please pass on my personal thanks to all of your band members. "