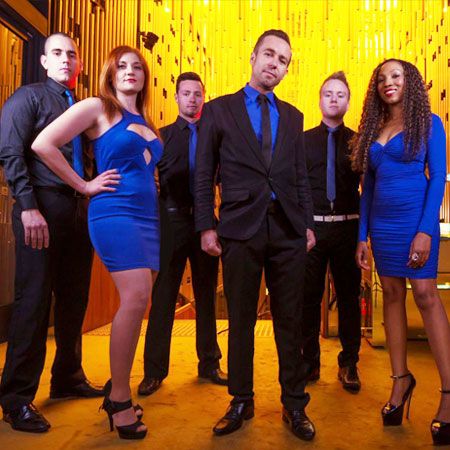 REASONS TO BOOK
One of Australia’s most in demand Funk-Rock and Hip-Hop party bands
Provide intricate harmonies and highly dynamic performances
Repertoire of the greatest ’80s hits through to huge chart toppers
Create an uplifting party vibe and add class to every event
Based in Perth and available to perform at events worldwide
Cover Bands, Live Music and DJ

Based in Perth, this incredible band are one of Western Australia’s most in demand Funk-Rock and Hip-Hop party bands. Providing intricate harmonies and highly dynamic performances; their synchronised moves and audience interaction engage the crowd like no other musical act on the Perth music scene!

Available to hire as a 6 or 7 piece act, they provide a huge repertoire of the greatest hits from the ’80s through to huge chart toppers of today. Each song is interpreted in their own unique funk-rock style, to create an uplifting party vibe throughout the night, adding class to any event they perform at.

Guaranteeing to provide inspiring performances that will have any crowd up and dancing in no time, Party Band Perth are a huge hit at corporate events, private parties and weddings.

Playing at Australia’s best live music venues, they are just as popular at venues with a young demographic as they are at venues with a more mature or mixed crowd. Always professional, reliable, attentive to the finer details, and with an intuitive ability to pitch their performance at exactly the right vibe and tone required, they are truly in a class of their own.

" Firstly, wanted to again express a very big thank you to you and your band members. The show that you put on was awesome and we have had so much positive feedback from all employees. It was a great night "

" The band were firstly a pleasure to deal with, their Music variety and interaction with the audience was first rate, a great night was had by all, I would have no qualms in highly recommending them for any future functions. I am also sure that we also opened the bands eyes to what we miners live and breathe whilst we are away from our homes and loved ones. "

" I've been meaning to email you these past few days, just to say a massive thank-you!!! Everyone raved about you guys, everyone who attended the night really enjoyed it. Thanks too for promoting our fundraiser; we ended up raising $10,000, so that was massive effort on everyone's behalf. "