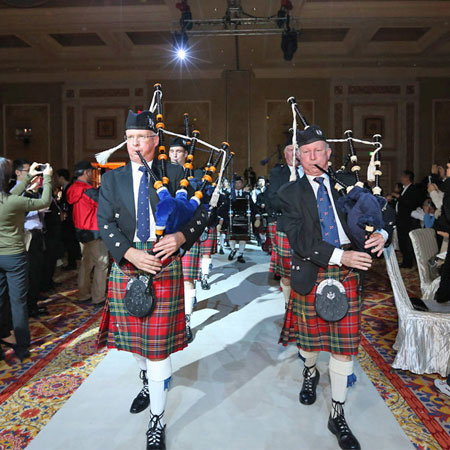 REASONS TO BOOK
Upbeat performances will liven up any event
Perform as a complete band or as individual pipers / drummers
Hong Kong’s largest civilian pipe and drum band
Winners of the 2018 Singapore and Southeast Asian Pipe Band Championships
Based in Hong Kong and available to perform at events worldwide
Live Music and DJ, World and Cultural Acts, Bagpipers, Scottish

Formed in 1982, this band has gone on to become the largest civilian pipe and drum band in Hong Kong!

The group is a diverse collective of pipers and drummers living in Hong Kong but originally from Scotland, Northern Ireland, Wales, Canada, USA, New Zealand, South Africa and Hong Kong itself.

Many of the band members have previously played in police and military pipe bands and each member brings new techniques and experiences to the group, which when brought together have won them the 2018 Singapore and Southeast Asian Pipe Band Championships and lead them to be ranked as the highest graded band in Hong Kong.

They can perform as an entire group or perform as individual pipers and drummers or smaller groups for functions such as Burns’ Supper, St. Andrew’s Day, Hogmanay, private parties, corporate events and more.