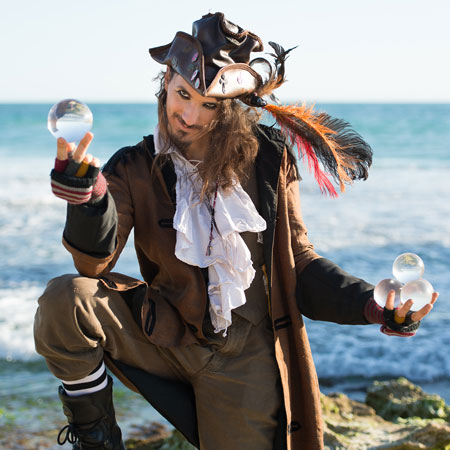 Ahoy mateys, it is time for a shantey about one of the most fearsome kids entertainers to have sailed the seven seas. Pirate Circus Performer be his name and he sure knows a thing or two about children’s party entertainment. From Australia to Europe he has hoisted the Jolly Rodger, performing pirate shows to shiver the timbers of little landlubbers all over this here planet. Specialising in nautical nonsense, our pirate character has provided interactive entertainment to bring a taste of salty sea air to your event.

An experienced kids entertainer, this pirate brings a treasure chest of funny acts to nautical events across the globe. Providing full pirate shows, roaming children’s party entertainment and lively workshops, our shipmate incorporates lots of circus skills and interactive fun into his act.

Pirate entertainment
- Adventure show: A nonverbal adventure extravaganza, this variety circus show includes contact juggling, puppets & lots of swashbuckling
- Puppetry show: For kids of 4-8 years old, meet our pirate character’s group of puppet friends
- Pirate party: Go on a voyage with our pirate to find treasure, participate in workshops and hear nautical tales
- Roving entertainment: Performing contact juggling and other circus tricks, our pirate can wander around your venue meeting guests and posing for photos
- Pirate board games: Play lots of pirate pirate themed games or design your very own pirate ship
- Trash to treasure chests: Kids can make their very own treasure chests with our fun kids entertainer
- Treasure map making: Find out where the bounty is hidden and make your own colourful treasure map

An experienced entertainer, our pirate has performed at lots of birthday parties, festivals and nautical events including The Fringe World Festival and Perth Royal Show. Full of maritime banter and a bounty of tricks, this pirate is guaranteed to make waves at your event. For more information about booking our Pirate Circus Performer for your event, don’t hesitate to contact our team at Scarlett Entertainment today.

" We loved having you and the young lads you entertained at the end will never forget you. When I asked them if they had fun and what was their favourite part of the day, it was you they loved the most. "

" A MASSIVE thank you for being the hardest working performer for 2016 - performing the most hours and helping the committee with set up! Feast, Roving, Gate entertainment, Kids Entertainments, Stage Shows, Dragon burning... the list goes on! Can't wait to see what you'll do for our 20th anniversary! If you have an event and want an amazing performer - Hire this guy! "