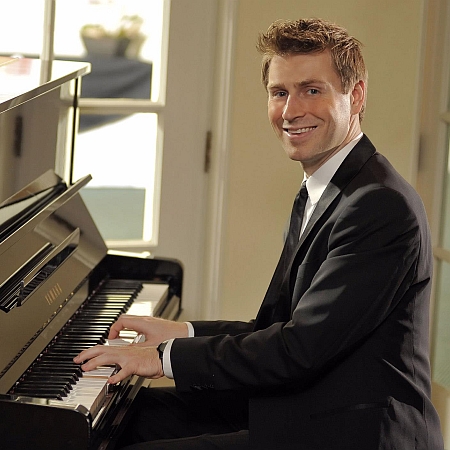 A piano virtuoso and extremely talented vocalist, through handwork and determination this artist has gained recognition as an internationally acclaimed pop pianist and vocalist performing at some of the USA’s most prestigious venues such as Beverley Hill’s Crustacean Restaurant, and events including the U.S. Open Tennis Tournament in New York.

In addition to his performances at high-end events and venues, he is a highly sought after producer whose credits include the music for the Fox television series “Blueprint for Green”, the soundtrack for the PBS documentary “Footsteps – a Journey in Faith”, the benefit single for the 35W Bridge Collapse and American Red Cross Final Ride Home, and the debut solo album for Broadway performer Connie Kunkle.

His repertoire features a range of both original compositions and unique arrangements of pop hits from the last seven decades, including well-known songs from film and movie soundtracks. He can also accommodate clients’ requests, creating piano and vocal compositions of special songs in order to give your event that extra personal touch.

His passionate performances ooze class and sophistication and will not fail to impress guests at any event. An experienced performer and consummate professional, he has WOWed audiences around the world with his beautiful performances. Ideal as subtle background music, or as a full stage performance, he will be the talk of your event.