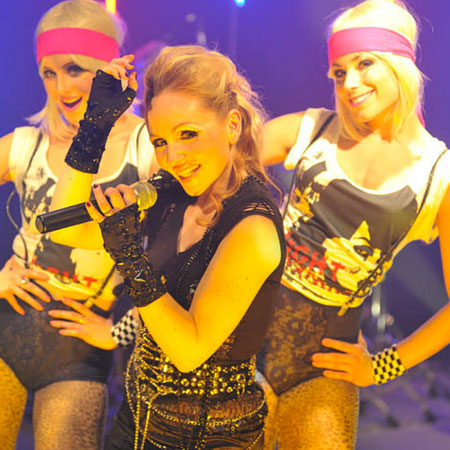 This party band has been entertaining clients all over the world for over 8 years now. Hugely in demand, they racked up 23 gigs last December alone. Their extensive repertoire spans the 1950s through to modern day making them one of the most versatile bands out there. The band is made up of a core of five musicians creating a tight slick contemporary sound. Lead vocals are lead by Belle, with her raw power and shear individuality every song is delivered with unfaltering passion and intensity. The rest of the band supply a rich blend of carefully honed backing vocals to compliment each song.

For larger parties further band members such as a male singer, sax player or indeed horn section can be added. For something a bit more showey, dancers can be booked with the band to perform choreographed routines throughout the performance.

" Thankyou for being the numero uno party band. Wow what a party, you guys really took the roof off and made it an amazingly memorable night for everyone. "

" Thank you to you and the band for the fantastic performance at our wedding on 27th August. Everybody had an amazing time and people are still talking about how good you guys were! For some reason all the chicks loved your saxophone player...! And the singers voice blew everyone away. Thank you also for all your help throughout the day with the PA - it's all a bit of a blur but I didn't have to worry about anything "

" Just a quick note to say Thank you very much for playing at the wedding I was over the moon with the professional way you were there early to set up and well, the music was fantastic!!!!!!! lots have people have commented how great you all were and it made for a brilliant Wedding (This was my only Task for the wedding prep) so glad I picked you! we will recommed you to anyone looking for the best party band on the south coast on England. Thanks for letting me sing, hope I didn't make your ears bleed. "

" The band were absolutely fantastic, I really can't express in words how amazed we were by them. The dancefloor was full from the second the first dance ended until the wedding finished all thanks to the group! People of every age gave it their all (we have photographic evidence) and we have had so many compliments that the band were the best that anyone had ever seen at a wedding, and some of our guests have been to a lot of weddings! It was great to talk through what we wanted and agree arrangements with Richard in the run up to the wedding and on the day itself the whole band were professional, unbelieveably flexible (so sorry for the late start guys!) and above all absoluetly fantastic! They pitched their songs just right and I will never forget the entire party doing a dance off to Footloose - a one in a million day topped off by a one in a million band! Thank you so much! "