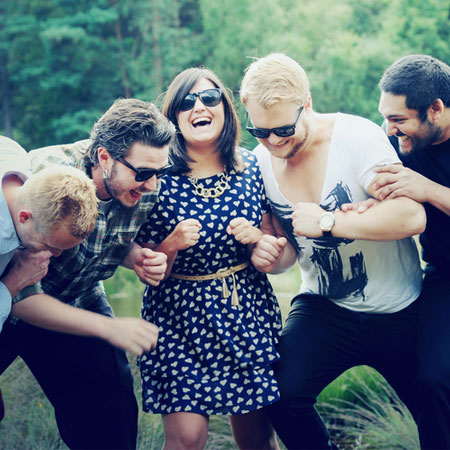 This powerhouse live party band is formed from some of the music industry’s top session musicians. Each member has a huge amount of professional experience and collectively they have worked with the likes of Adele, Jamie Cullum, Seal, Tom Jones, Ellie Goulding, Omar, James Arthur, Take That, Akon, Jon B, Elizah Doolittle, Stooshe, Union J, Mica Paris, Beverly Knight, Alexandra Burke, Olly Murs, Sugababes, Will Young, Peter Andre, Rizzle Kicks, Christophe Willem and London Symphony Orchestra. They have also made TV appearances for the X-Factor, The Voice, BBC Radio 1 Live Lounge, MTV and Channel 4. Together the band have performed at wedding receptions for members of the Olympic Team GB squad, private parties for members of Manchester United FC and at events for Barclays, O2 and Help For Heroes.

The main band is an electrifying 5-piece headed by a stunning female vocalist, although they are also available to perform as an acoustic duo or a full 10-piece show band with a punchy horn section! Specialising in pop, R&B, soul, funk, rock and jazz they also play motown hits and top 40 dance floor fillers; their eclectic repertoire has something to suit everyone and all occasions. Enthusiastic and full of energy, this incredible band take live performance to the next level ensuring that dance floors of any size are packed right until the end of the night!

One of London and the UK’s premium live party bands you can rest assured that these professional and experience musicians will create a night that you and your guests will never forget!

" Definitely one of the best wedding bands we’ve had here! "

" Just wanted to pass on my thanks for saturday, I know the schedule was demanding and I have to say a massive thank you for working around the timings. Everyone kept asking where I found you guys and how impressed they were. I won’t think twice about recommending you to any one needing a live band for their event. "

" Fantastic! We has an amazing time and loved all the songs you played, thank you for performing and coming all the way to wales. "

" [they] rocked Dubai on NYE at the UAE’s best jazz and blues club. The band were professional, polished and polite. The guests were dancing all the way through to the early hours of 2014 thanks to Natalie’s effortlessly outstanding voice and the polished sound of the band. I’m sure we will see you all back again. I would highly recommend this band to anyone. "

" …From the start, they have been great with regular contact and answering all our questions. They looked the part at our venue, modern and stylish! The range of music was amazing, our first dance blew everyone away being a twist on an old classic and there was something for everyone. I could not rate them enough and had so many people on the night asking for their details. We really want another function to have the perfect excuse to book them again! Thank you for all of your input before and on the day. We could not have been happier! "