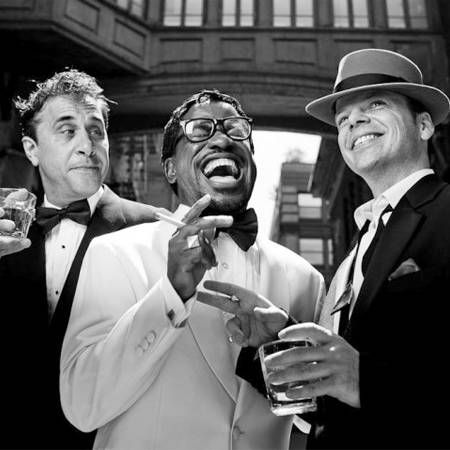 REASONS TO BOOK
A fun-filled, musical celebration recreating the magic of The Rat Pack
Highly skilled in improvisation and live interactive performance
Capture the look, sound & irresistible charm and chemistry of the trio
Frank, Dean, Sammy can be joined by a Marilyn Monroe tribute
Based in New York and available to perform at events worldwide
Live Music and DJ, Tribute, Lookalikes and Impersonators, Themed Entertainment, Jazz,Swing,Blues and Jive, Rat Pack, Las Vegas, Las Vegas Theme

When Frank Sinatra, Dean Martin and Sammy Davis Jr. hit the stage, it was always a “swingin affair”! These enormously talented entertainers, known as “The Rat Pack”, were the coolest cats to ever play Las Vegas…or anywhere for that matter!

Now, three skilled New York actors are bringing the songs, the laughs and the charisma of Frank, Dean and Sammy back to life in this swinging Rat Pack Tribute show!

This trio of professionals are highly skilled in improvisation and live interactive performance. When they perform, they not only capture the look and sound of Frank, Dean and Sammy, but their irresistible charm and chemistry as well!

Just like the original Rat Pack, the show is completely spontaneous and full of ad-libs...making it a must see...over and over again!

“Luck be a Lady”, “That’s Amore”, “The Lady is a Tramp” and “Candy Man” are just some of the timeless classics you’ll enjoy during the show along with a whole lotta ring-a-ding-ding! The show is a fun-filled, musical celebration that re-creates the magic of The Rat Pack.

The group has performed at various corporate events and private affairs throughout the USA. This show has thrilled audiences in casinos in Atlantic City, BB King’s in Times Square, Feinstein’s at the Regency, Harrah’s St. Louis and the Empire Casino at Yonkers Raceway. The trio also flew to Dubai in the Middle East for a very special private performance which was a real “gasser”!

" Great show, brings back the days with the Rat Pack. The cast are fantastic, they really studied Frank, Dean, Sammy and Marilyn well. A wonderful show, definitely worth seeing. "

" This show was spectacular. The performers not only sang with the spot-on voices of Frank Sinatra, Dean Martin, Sammy Davis, Jr. and Marilyn Monroe, but their swagger, look and banter were also tops. "