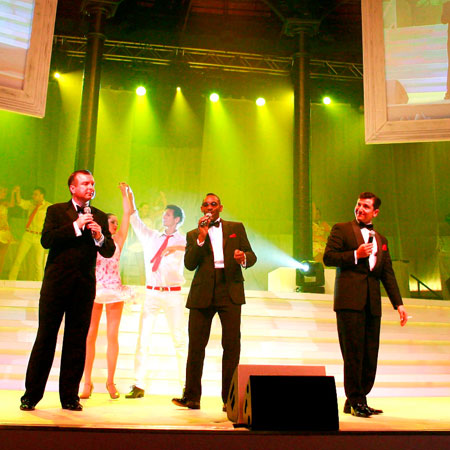 The Rat Pack Trio is Britain's premier cabaret and longest running Rat Pack tribute show. Fully rehearsed, the show has successfully toured venues throughout the UK and Europe for many years.  There hit show perfectly captures not only the wonderful music and comedy of the original legends, but also the remarkable personalities of the stars who truly ruled the entertainment world.

These guys not only sing like their heroes, when on stage they physically resemble them, share their unique mannerisms and even talk like they are at the Sands taking part in the summit.  The show includes all of the hit songs made popular by the legendary performers such as "Ain’t That A Kick In The Head", "The Lady Is A Tramp", "My Way", "Mr Bojangles" and of course, ‘New York New York’.

Past bookings include... A Royal Command Performance, A performance for US President Bill Clinton at the Round House in London which was the biggest Rat Pack show in history and regular performances at - The Dorchester Hotel, The Cafe Royal, Gleneagles Golf Club, Wentworth Golf Club, Kensington Palace, Alexandra Palace, The Sporting Club of Monte Carlo, and the Limelight Theatre, Cologne.

In addition to this, the show is a regular attraction at Theatres, Casinos, Hotels, Holiday Centres and Universities in all parts of the country.  A Corporate favourite, The Rat Pack Trio regularly entertains clients such as Ernst & Young, Hitachi, Birmingham City Football Club and The Royal Bank of Scotland.

Private functions also feature heavily in their packed schedule, in fact there is no function that The Rat Pack Trio can't tailor their show for. Apart from the outstanding production values of the show, it is the sheer flexibility and unique choice of scale performers that makes The Rat Pack Trio the number one choice when booking entertainment for every aspect of the business.

" You guys really are TOP of the premier league! Your shows gets even better every time that we book you "

" These guys are fantastic "

" This Guy Really Is Sinatra! "

" This was a quality show and exciting tribute to the ‘Rat Pack’, with three top performers and four experienced show biz musicians to back them up. With some modern techno wizardry they made the same big sound as a full dance orchestra "

" The show was amazing just unfortunately over far too quick the time flew by. Everyone loved it though and thought all of you were fab. Nikki and I knew you guy's were good from the clips and demo's sent to us but when we heard you in rehearsal we couldn’t believe how good you were, we have been telling everyone about it and there is a buzz in the office today "