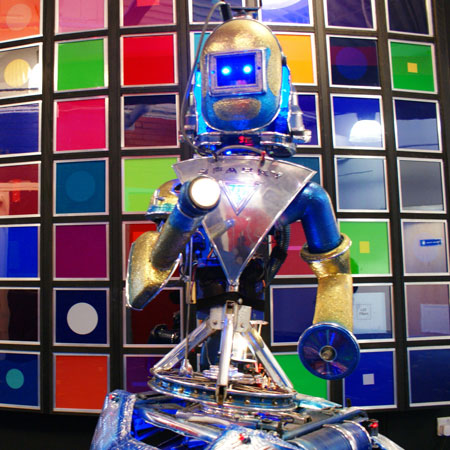 The Recycled Robot is a self propelled, radio-controlled, genuine 100% robot with no human parts at all and tons of personality.  At two metres tall, he talks, dances, plays music, squirts water and causes a sensation wherever he goes. The Recycled Robot is fully illuminated at night and is made from a fascinating array of recycled materials.

He delights children and adults alike, up and down the country with his electric personality. Come and shake hands with the Recycled Robot but be careful of his secret weapon or you might get squirted with water!

Created in 1994 the latest version of The Recycled Robot squirts water from its left arm, waves to you with its right, looks you up and down with its nodding head, and can spin indefinitely in either direction from its waist. It’s controlled with a state-of-the-art digital remote control system, by its creator, who is always close by, posing as an onlooker. With an array of assorted lights and robot sounds, The Recycled Robot wanders up and down the street as if he were self aware, puzzling many people as to how he works and who, if anyone, is controlling him.