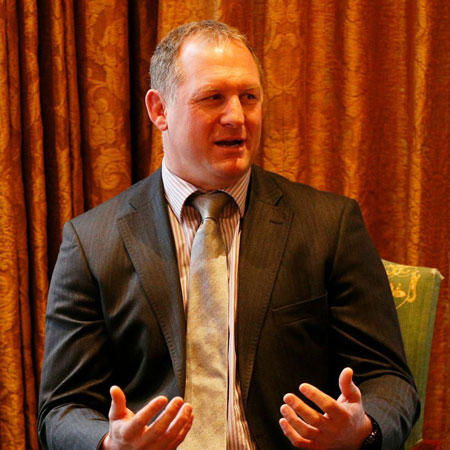 REASONS TO BOOK
Motivational keynote speaker and Innovation Expert
An expert on courage, fear, risk and will power
A well respected entrepreneur and World Record Holder
Previous clients include P&G, Coca-Cola, ITV, HP and Aviva
Based in London and available to perform at events worldwide
Sports Speakers, Speakers and Hosts

Throughout this international career, Rugby World Cup winner, Richard Hill became one of the world’s greatest defensive players. Known as the ‘Silent Assassin’, Richard had the unique ability to perform at a consistently high level for both his club Saracens and for his country, proving himself the ultimate professional.

From a young age, Richard has always been involved with Rugby beginning at the U-16 level. Winning 71 games for his country, Richard soon became known as the British Lion. Not long after he became a key component to winning the Rugby World Cup in 2003.

Since retirement Richard has worked at Saracens in business development, community outreach and as an academy mentor. He now sits at the heart of the England set up with a seat on the RFU Council, and acts as a consultant to the RFU helping to identify, mentor and develop young players both on and off the field.

After a distinguished career, Richard accumulated 71 caps for his country. Hill now sits on the Rugby Football Union (RFU) Council and acts as a consultant, mentoring young players on and off the field.

With his acute awareness of the direct link between sport and business he can share his expertise and in-depth knowledge on the following areas:

" I just wanted to let you know how grateful we were to have Richard at our event yesterday. He was a very entertaining speaker and kept everybody amused. It was great that he stayed to have lunch and chat with our guests. "

" Just a final note of thanks re Richard working on our show yesterday, all went well and he was a pleasure to work with, I very much hope he enjoyed his day with us. He has bags of credibility, a good rapport, he’s forthright and has the knowledge to back up his opinions. "

" In December last year Richard made a surprise guest appearance at the Growing Business Awards which we host each year at the Hilton Hotel on Park Lane. What a professional in every sense. It is easy to see why Richard is so popular. He was on time, nothing was too much trouble, despite the fact that we kept him waiting in reception to preserve the surprise element. "