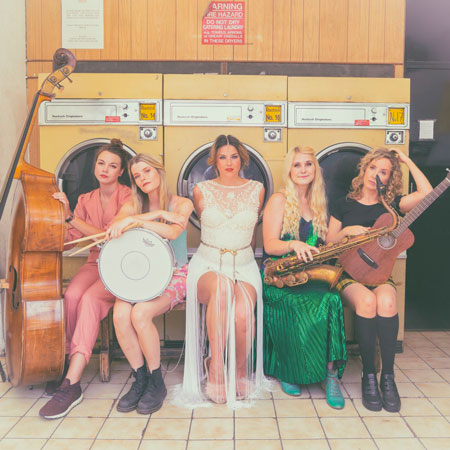 Five extremely talented female musicians create feel good acoustic music as well as roaming entertainment as they glide around events playing their instruments and singing popular songs. A female band that is overflowing with charisma and charm is a hit with all audiences as our London band roam around entertaining all who they pass.

A London band who encourage dancing in the street and being carefree is a fantastic act for roaming entertainment as our five female musicians glide around events playing their instruments as well as singing in harmony with one another.

Roaming entertainment that consists of two guitarists, a saxophonist, drummer and double bass player create stunning acoustic music that covers songs from Royals by Lorde to He’s a Tramp by Peggy Lee, Sax by Fleur East and many more contemporary music.

A five piece band that is perfect for corporate events, private parties, mix and mingle occasions and any event that wants a roaming band that will lighten everyone in the rooms mood and create an evening or occasion that is one to remember.

Not only does our female band play brilliant acoustic music but their five personalities shine through in their performances, merging together seamlessly to make the combination extremely infectious on both the eyes and the ears.

Our female musicans have worked and held residencies at prestigious venues such as The Ivy London, The Ritz, Lovebox Music Festival, BBC Radio 2 and BBC Radio 3 as well as starring in an array of West End theatre credits.

For event entertainment packed with personality, charisma and raw talent our London Band is the coolest band around! Our musicians steer away from the generic function band format with their roaming music that is guaranteed to have your party singing and dancing along to the coolest hits, constantly clapping for more.

To book our wonderful Roaming Acoustic Band, or for more information contact our Entertainment Specialists today.