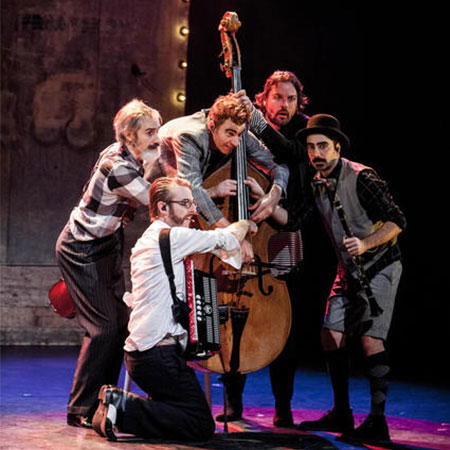 Slapstick Musical Comedy Show is an ode to musical comedians like Charlie Chaplin, Marx Brothers and Spike Jones. A fantastic musical theatre production that combines numerous acts, this live musical comedy was born as a tribute to the music hall tradition.

Performed by five zany actors and musicians, this musical comedy extravaganza is an explosive fusion of musicianship, nostalgia and traditional physical comedy with a modern twist. Our artists are talented and versatile multi-instrumentalists. Between them, they can play more than 200 instruments.

Eccentricity and a pinch of melancholy are the main ingredients that make this recipe so popular. Highly acclaimed by both critics and audiences, this live musical comedy has captivated spectators at numerous festivals and theatres including the Edinburgh Fringe Festival.

Inspired by the many works of Chaplin and other traditional physical comedy legends, this musical comedy extravaganza is guaranteed to captivate audiences of all ages, especially the Marx Brothers and Cia. fans. The show also involves audience interaction, as our musicians won’t hesitate to jump off stage and clown around.

Audiences all over Holland and across Europe have already enjoyed watching this group of artists perform. The show has been praised by numerous experts and media such as the Daily Mail, The Herald or Everything Theatre, to name a few. Defined by many ‘as impressive as it is funny’, this musical comedy extravaganza will leave your heart lightened and bursting out laughing.

Scarlett Entertainment offers a variety of musical theatre productions for events and in the Netherlands and all over the world.

If you’re interested in booking Slapstick Musical Comedy Show, contact us today and ask to speak to one of our Entertainment Coordinators. They will be more than happy to answer all the questions you may have about this musical theatre production and guide you through the booking process.

" A show that zings with energy and fun "

" As impressive as it is funny "