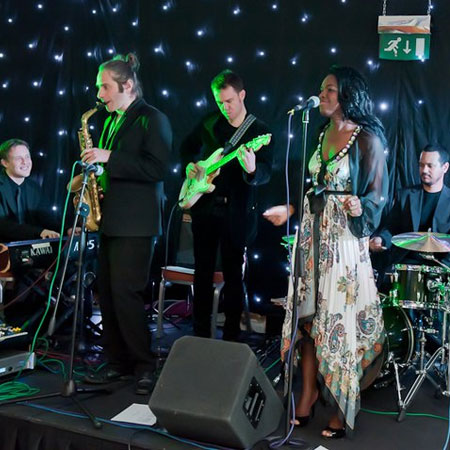 Specialising in the very best of Motown, Disco, Funk and Soul this 6-9 piece band authentically replicate the hits the way they were meant to be played.

Collectively the members of the group have live and recorded credits with some of the world’s most revered artists including Tina Turner, Bob Dylan, David Bowie, The Eurythmics, Terence Trent D'Arby, Seal, Everything But the Girl, The Pretenders, The Temptations, Beverley Knight, Herbie Hancock and Roy Ayers.

The band's vocals are catered for by two exceptional talents. Eno and Marcus have experiences totalling 30 years plus between them. Marcus is regarded as one of the foremost soul and blues voices on the London and UK scene. He has appeared at the Albert Hall with BB King, opened for Walter Trout and headlined numerous festivals in the US, UK and Europe.

Eno has been privileged to use her God given talent to wow audiences around the world. She first starred in the touring production of FAME the Musical as “Mabel Washington, and then The Apollo singer in “The Story Of Buddy”. Her TV appearances Include, Channel 4 Gospel Singers, Stars In Their Eyes, As Alicia Keys, where she won her own show in the series!

Her most remarkable achievement was winning The Title Of VH1 London Diva on the widely televised Series on VH1 (Born To Diva) which aired in Europe and America She was flown to New York where she represented the UK, working with some industry greats and recording at the hit factory and performing at the VH1 divas Show In New York.

She has also worked extensively as a backing singer for various artist’s from Lionel Ritchie at the Princes trust concert, Mica Paris, Lemar and Will Young to mention a few.

" One of our most popular bands "

" Thank you for the great music "

" Your contribution helped to make our night very special "