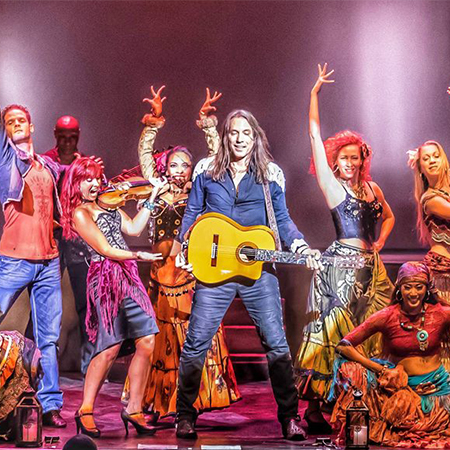 REASONS TO BOOK
An Emmy award-winning theatre production that mixes different dance styles, music and acting
A Spanish guitar show that takes audiences in a journey to beautiful and exotic places
A musical that combines salsa, samba, tango, flamenco and other Latin dance styles
Special guests include American Idol’s Kimberly Locke and Dancing with the Stars’ Nick and Lina
This Spanish Nights Musical is available for bookings in the US and worldwide
Musical Shows, Dancers, Live Music and DJ, World and Cultural Acts, Guitarists (Classical and Spanish), Spanish And Flamenco, Cabaret and Stage Shows, Flamenco Dancers

Would you like to take audiences on a journey to beautiful and exotic places all around the world? You can do it and they won’t even have to leave their seats by booking our Spanish Nights Musical, an Emmy award-winning theatre production that combines different dance styles, music and acting.

This Spanish guitar show tells the story of a bohemian guitarist and wanderer who travels around the world getting to know new cultures, playing the guitar and discovering new music styles. His voyage across the world takes him to exotic places like Cuba, where he’s introduced to salsa and Latin rhythms; Argentina, where our traveler dances a passionate tango with a female dancer; and Spain, where he reaffirms his passion for flamenco. Our Spanish guitarist also travels to Brasil, China, Egypt, India, Italy and the Middle East.

During this enriching journey, our bohemian guitarist starts to mix classic rock anthems by artists like Led Zeppelin, The Rolling Stones and The Eagles with Spanish rhythms, creating an unprecedented fusion that captivates audiences, who is an active part of this musical. Dancers and musicians involved in this award-winning theatre production always make spectators feel as part of the show by jumping off the stage and playing and dancing in the theatre’s aisles.

Famous artists like Kimberly Locke from American Idol and Dancing with the Stars’ dancers Nick and Lina have been guest stars of our Spanish Nights Musical in the past, which has helped it build a good reputation and a well-deserved fame.

This Emmy award-winning theatre production combines different dance styles like flamenco, salsa, tango and samba and has had special guests like Kimberly Locke from American Idol or Dancing with the Stars’ couple Nick and Lina.

Scarlett Entertainment can offer a wide variety of Spanish and Flamenco entertainment for events all around the world.

To book our Spanish Nights Musical, contact us today and ask to speak to one of entertainment coordinators. They will be more than happy to give you further details on this Spanish guitar show and guide you through the booking process.