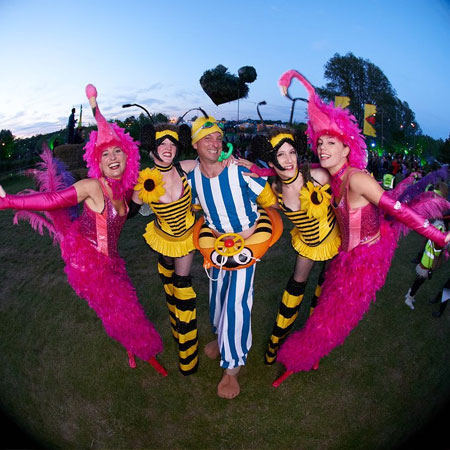 This stilt act specialises in bringing additional flair, style and spirit to any occasion with their bright quirky glamour and sensationally costumed entertainment!  They are dedicated to excellence with their uniquely bespoke costumes and highly skilled entertainers.

If you have a particular special event with an idea, colour or theme in mind for ground or stilt costumes, they can adapt their style to fit the occasion.  Their stilt designs are innovative, imaginative and unique!

Totally interactive, their characters involve audiences in a world of fun and humour with a comic cocktail of dance, wit, endless energy and smiles!

Not only do they entertain you from nine feet up, they also have an array of ground level statues and comedy characters!  Skills include stilts, crowd interaction, aerial, balloon modelling, fire, dance, angle grinding and presenting.

To book, contact our team of dedicated entertainment coordinators today.