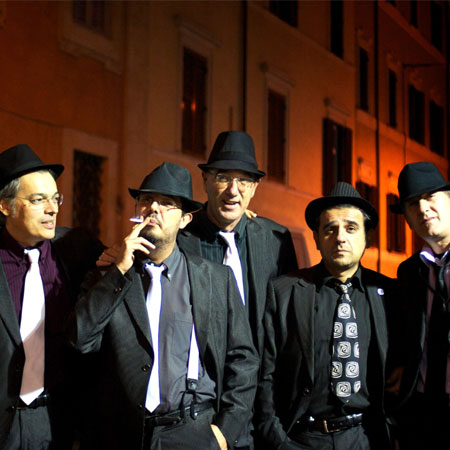 REASONS TO BOOK
One of the hottest live Swing & Rat Pack bands in Europe
Performs classic Italian and American swing tunes from the 50s & 60s
Performed at over 200 Irish and British weddings with great success
Played at Brian McFadden and Vogue Williams wedding in Florence
Based in Rome, Italy & available to perform at events worldwide
Jazz,Swing,Blues and Jive, 1920s and Vintage Music, Themed Entertainment, Live Music and DJ, 1920s,Great Gatsby and Prohibition

If you are looking for a swing wedding band in Italy, then you came to the right place! The Swing group is based in Rome, and it is led by singer Marino, who lived in Ireland and Britain for many years before returning to Italy.

The Band performs classic Italian and American swing tunes from the 50s and 60s, among other modern hits with a swing twist. These include originals from Frank Sinatra, Dean Martin, Louis Prima, Elvis Presley, Nat King Cole and The Blues Brothers.

In the last four years, they have performed at over 200 Irish and British weddings with great success.

The Swing Wedding Band believes that their understanding of Irish and British culture has put them in a privileged position to provide the perfect entertainment giving the couples and their guests a day to remember.

WHY A SWING BAND?
Swing is tailor-made for weddings. It caters for young and old alike, and is great to dance and sing-a-long to. Swing is timeless, and while most of your older relatives will not dance to a funk or rock tune, they will all get up for a classic Sinatra song.

WHY THIS BAND?
Most bands in Italy will play, but will not entertain your guests, simply because they don't speak English or understand your customs. The Swing Wedding Band put together a show that involves your guests and makes them feel a part of your memorable day......and if you want to join them on stage to sing a song, you are welcome!

" The band travelled to play at our wedding in San Donato Val di Comino on the 29th Oct 2012, and they were amazing the dance floor was full from start to finish and they even learned our 1st dance song for us and Marino did a fantastic job! I cannot recommend them highly enough.. Everyone loved them young and old. Many thanks for an amazing night!! "

Submitted by Martina and Brian on Tuesday 13 November 2012

" The Band played at my wedding in Rome on 21st September 2012 and they were brilliant. Everyone from all age groups was up dancing. I would highly recommend them for any wedding, they are excellent. "

" I booked them for our wedding in Umbria in August 2012. I was not sorry. The band are simply brilliant. Everyone at our wedding raved about them (and are still talking about them) and we did not get off the floor for the night. My only regret is that we could not have them play for longer due to noise restrictions at our venue. I would highly recommend the band to anyone looking to dance the night away and who cater for all ages. Thank you for making our wedding so much fun. "

" After a lot of researching we eventually found the band that we were looking for to play at our wedding (3rd June). The wedding Band came all the way from Rome to play at our wedding in Northern Italy and they were absolutely fantastic. We are so pleased that we booked them! They played music that got everyone up dancing or singing along.Before the day, Marino was in regular contact with me, suggesting music and asking for any requests – this was really good when you are planning an event from another country. In the end we asked the Wedding Band to play for the ceremony (a trumpet and clarinet), after the ceremony and during the aperitivi, and then for the dancing after dinner. Each time, they played different songs each suitable for the moment and we were really pleased with the music throughout the day. They really understood the crowd and also what we wanted for our wedding. They have their own style and lots of energy… and they understood the British wedding tradition that people want to dance! We would highly recommend them to play at your events and we would like to say a big thank you to them for making the journey up to Varese for our wedding and making it such a wonderful day for us. We wish we could do it all again! "