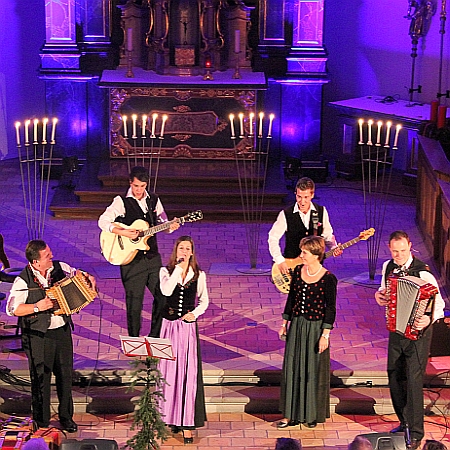 REASONS TO BOOK
A musical family ensemble performing traditional folk and country
Established in the 70s, they are still known for their bubbly music
Have extensive experience performing at prestigious venues worldwide
Provide unmistakable accordion playing, yodeling and catchy melodies
Based in Switzerland and available to perform at events worldwide
Swiss, World and Cultural Acts, Irish,Ceilidh,Folk and Country, Live Music and DJ

This Swiss Folk group are a well established family musical ensemble, who began singing in the 70s and 80s performing the traditional folk and country music of Switzerland. Grandfather Hans, founder of the group was known for thrilling people up and down the country with his unmistakable accordion playing and his catchy melodies that are still remembered today.

Still known today for their light, appealing and bubbly music, the group's first big break came when they won the talent search program Musikantenstadl in 2007. They became an immediate household name, with appearances in a number of TV shows and open air events. Also in that same year, their album broke into the Swiss charts and stayed there for 59 weeks, garnering a gold award a short time later.

Swiss Folk Group have toured around the world, bringing their music to every imaginable event and prestigious venues worldwide. They have performed in Australia, Germany, USA, Finland, and Estonia as well as in some countries in Asia and Africa.

Perfect for every occasion, the group regularly perform at corporate events, private parties, concerts, festivals and hotels. Enjoying success and popularity in their native Switzerland, the group continue to make music that they hope will entertain the hearts and minds of their listeners.