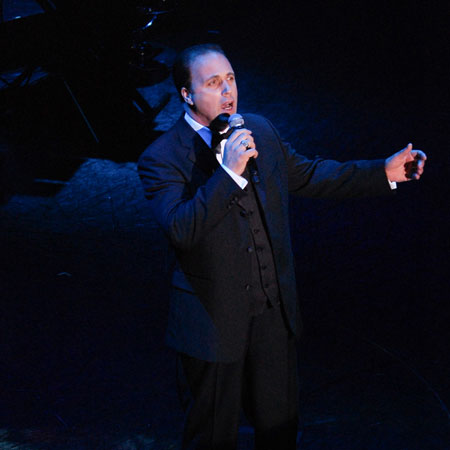 REASONS TO BOOK
World Class entertainer with an Operatically trained Tenor voice
Performed on stage & TV with Luciano Pavarotti and Lesley Garrett
Popular with Sporting Events: Pre-Match Entertainment
Over 30 performances at sporting events at the Millennium Stadium Cardiff
Can perform Grand Opera to Swing to Classical Crossover. Based in the UK
Live Music and DJ, Classical Vocals

Laurence is a world class entertainer with a superb operatically trained tenor voice. His versatile singing and magnetic stage presence, enables him to cross musical genres, from grand opera to swing to classical crossover.

He has performed on both the stage and television with some of the world’s top artists including performances with Luciano Pavarotti and Lesley Garrett on channel 4 and live appearances with Hayley Westenra and Amici forever. Paul Bateman top producer who has helped the careers of Russell Watson, Lesley Garrett and Sarah Brightman said “Laurence is on the right lines to make it to the very top”. “He undoubtedly has a terrific voice”.

Laurence has sung at countless sporting events, including representing the England football team several times and over thirty appearances at the millennium stadium Cardiff for football and rugby finals culminating in interviews on “This morning” with Fern Brittain and Paul Ross and GMTV amongst others.

A whirlwind of publicity has resulted in him singing in concerts all over the globe including guest performances on all of the world’s most prestigious cruise lines to great acclaim.  Laurence is available for concert, sporting, product launches, award ceremonies, corporate work, cruise, funerals, private parties and singing guest.

" A mobile phone salesman who packed in his job to pursue a career in music will complete a remarkable 12 months tomorrow when he sings in front of 80,000 people at football's Worthington Cup final. Laurence, 38, gambled his career on becoming an opera singer, and is now being tipped as a rising star in classical music. Paul Batemen, a producer who has helped the careers of Russel Watson and Lesley garrett said “Laurence is on the right lines to make it to the very top. He undoubtedly has a terrific voice "

" Singing sensation Laurence will step out in front of a 70,000 crowd and his dream of becoming an international celebrity will be one step closer.......Now he is on track to become the biggest opera singer Britain has ever seen. "

" After the great reception he received at the Bologna game, we have also invited back tenor Laurence to give some more spine-tingling performances. This time you will all have a part to play too as we go for the biggest ever sing-along of Jerusalem (well, the biggest one in Watford anyway). "

" West Bromwich Albion supporters were treated to not one, but two excellent performances. First world-renowned tenor Laurence whipped up the atmosphere at The Hawthorns before kick-off with a rousing ten-minute set - featuring classics like Nessun Dorma and the club's anthem The Lord is my Shepherd. "

" BAA had even laid on an operatic tenor, Laurence, to sing them in. Tenor Laurence is a veteran of such sporting occasions, but even he was overawed by it all today. "This is probably the best gig I've ever sung at," he said. It was just after 5am when he started going through is paces - Swing Low, Sweet Chariot, naturally, including the verses the fans did not know, and a clutch of other crowdpleasers including I Vow To Thee My Country and Jerusalem. But it was not long before he was drowned out by the cheers of the fans as one by one the team emerged from customs. "

" Tenor Laurence hits all the right notes – in every sense of the word, winning the entire audience over with a powerful set of operatic and middle of the road material. One to watch. "