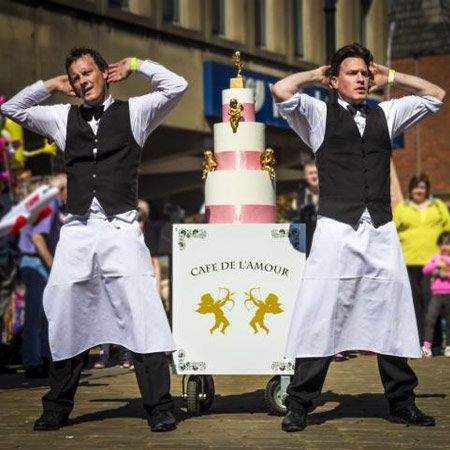 REASONS TO BOOK
Comedy Waiting Duo, a versatile and utterly charming act
They combine silent comedy and graceful slapstick to great effect
The duo are a terrific icebreaker and event talking point
Fantastic for food festivals, street shows, carnivals and more
Based in the UK and available to perform at events worldwide
Speciality and Novelty Acts, Walkabout Entertainment, Food and Drink Entertainment, Street Theatre, Comedy Act, Comedy and Surprise Waiters

The Comedy Waiters combine silent comedy and graceful slapstick to great effect. They help to serve food and drink…but in their unique kind of way! The duo is laugh out loud funny, a terrific icebreaker and event talking point!

The hilarious duo begin with the odd plate flip or sculpted napkin until, with a flick of their bow-ties, these undercover comedians reveal their true colours to your food festival, city street or ambassador’s ball.

To a rousing soundtrack of all time classics, the pair evoke the genius of Morecambe and Wise and conjure adolescent admiration with a hilarious boy band homage.

In the theatrical finale, rain cascades from umbrellas, with beautiful choreography performed to ‘Singing in the Rain’. Completely self-contained, with a wheeled trolley ready to roll on any terrain, this act is versatile and utterly charming.

" The guys were fantastic! The act has developed a lot and really went down well. I would be very happy to recommend them. "