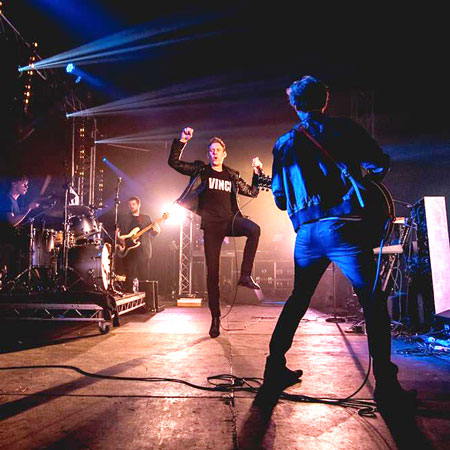 REASONS TO BOOK
Exceptional 4-piece tribute band will rock your stage with classic hits from The Killers
Our cover band delivers highly dynamic stage presence and thrilling show
Expect to hear classic hits including Human, Mr Brightside, and When You Were Young from our Killers tribute
The perfect rock band for events, gigs, festivals, parties, corporate entertaining and more
Based in Newcastle, UK, our The Killers Tribute Act is available for international bookings
Other Tributes, Live Music and DJ, Tribute, Lookalikes and Impersonators, Cover Bands

As close as you can get to the real deal, The Killers Tribute Act is an exceptional tribute band of one of the greatest rock bands of our time, The Killers.

Paying special attention to detail, our cover band’s performance is second to none. Featuring authentic tones and sequenced studio sounds to replicate The Killers own, audiences will feel as though they’re experiencing a private audience the real band!

Reproductions of backing musicians, stagewear, instruments, set choice and decoration, including the Killers own famous 'K' keyboard stand, is all present and correct for a genuine rock band gig experience.

There are even authentic projections and visuals on LED Screens playing in time with the songs, just like a Killers arena show.

Huge fans of The Killers, our tribute band’s musicians are passionate about creating a sensational show and paying homage to the fantastic music written and performed by the real band.

Expect to hear classic hits such as Human, Mr Brightside, When You Were Young, Somebody Told Me, Smile Like You Mean It, and many, many more.

Stars in their own right, our rock band for events have performed to crowds of thousands for events across the globe at sell-out gigs at venues The Killers themselves have played including Bush Hall, London Scala and Wembley Arena.

Scarlett Entertainment offers a range of rock bands for events in the UK, Europe, US, Middle East and beyond. Discover additional Killers tribute bands along with covers bands whose performances pay tribute to a whole host of iconic bands and solo artists throughout history.

To book our The Killers Tribute Act for an uncannily similar performance to the real thing, get in touch with our team of Entertainment Experts who’ll be happy to help with all of your cover band requests.

" They look great. They sound great. They put on a good show and are really nice guys. A brilliant addition to any lineup. "

" Absolutely incredible blew the roof off the place. Class set honestly and delivered such a good night. "