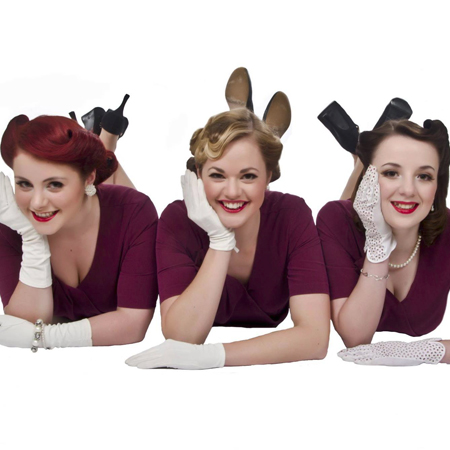 The Three Belles are a 1940s vocal trio inspired by The Andrews Sisters.

The Three Belles formed in their third year at the University of Portsmouth. They all found that they had a mutual love and almost obsession with The Andrews Sisters and their impressive harmonies, vocal style and characterful performances.

They have performed at IOW Fest, The Leicester Square Theatre and Victorious Vintage Festival in front of audiences up to 14,000 people. They have produced and promoted their own sell out tours including such venues as The Portsmouth Guildhall and The New Theatre Royal.

This past year saw the girls performing live on BBC South Today, The X Factor Talk Talk Ad, and they reached number 5 in the itunes UK Jazz chart with their Christmas single.

Having performed so far in venues from Sunderland to Cornwall, there is no limit on how far the girls will travel!

Last year the girls produced their interactive 1940s experience night, IN THE MOOD at the Portsmouth Guildhall and the St Ives Guildhall, Cornwall, where it SOLD OUT! They also took their theatre show, SING SING SING to The Stag in Sevenoaks and The New Theatre Royal where it SOLD OUT!