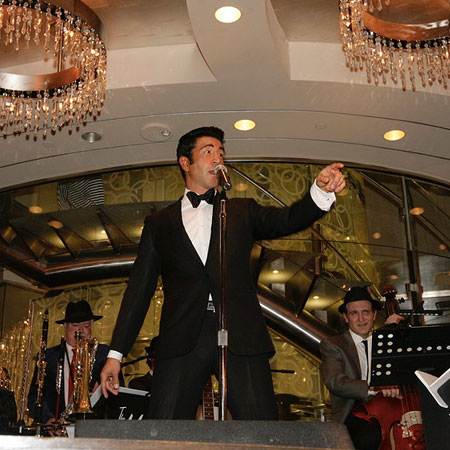 The Voice of Vegas

The Voice of Vegas VIDEOS

The Voice of Vegas PHOTOS

Vocalist Mark has fast become one of Las Vegas’ most sought after corporate event entertainers. Mark and his event band take you on a musical journey featuring Mark’s baritone-tenor voice. His range and vocal ability covers all styles of music, including jazz, r&b, rock, latin and classical.

Mark sings the music of our times, the music of our lives, he’s the new “Voice of Vegas.” Taking his performance a step further, Mark sits at the piano, and leads the band in an ELTON JOHN or JERRY LEE LEWIS tune, or strums the guitar while sharing an intimate moment with his audience. With selections ranging from the music like Frank Sinatra’s “Fly Me to the Moon” to Billy Joel’s “New York State of Mind” to contemporary styles like Michael Buble’s “FEELING GOOD”, Josh Groban and Jason Mraz.

Not to forget touching on Andrea Bocelli’s “TIME TO SAY GOODBYE” to medleys from iconic artists like BOBBY DARIN, NEIL DIAMOND music to Andrew Lloyd Webber’s “Music of the Night”, and the songs stir all your emotions.

From Swingin’ RAT PACK music to BROADWAY and back to MARK’s Los Angeles/Sunset blvd roots, classic rock and blues. He truly embodies what live musical entertainment has always been...it’s all about the music! Mark's band is a collaboration of some of Las Vegas’ finest musicians & singers. Not just side-men, but performers in their own right. Various female co-stars compliment Mark perfectly with some show-stopping duets.

The Voice of Vegas appeals to all generations, and has his audience singing and clapping along to the music of the millennium.

" Mark has got the entire package, presence, charm and grammy quality vocals "

IDEA ARTICLES RELATED TO The Voice of Vegas
See More