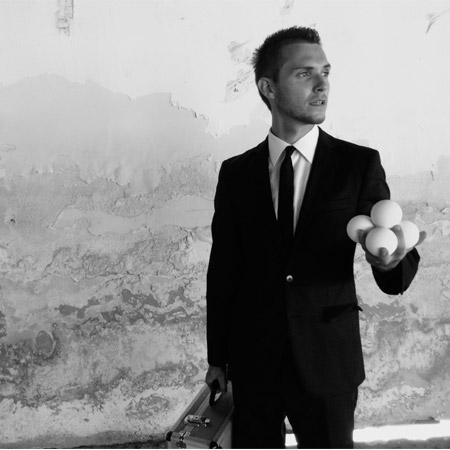 Scarlett Entertainment is a leading booking agency providing a wide range of acts and shows for events across the world. Toronto Magician & Circus Act is one of the most sought after magicians in Canada and internationally, providing wow factor live entertainment for all occasions. Whether you are looking for an illusion show, circus show or close up magicians for your event, our versatile live magic artist is sure to amaze and delight audiences. A spectacular magic show for all ages, guests are sure to be charmed by this charismatic Canadian and his bag of tricks.

Described as “admirable and inspiring” by the Canadian Association of Magicians, our renowned circus artist honed his skills at Circomedia contemporary performance programme in Bristol and Versicio School of Performing Arts in Switzerland before taking to the stage as an experienced professional. Awarded first place for his circus act at Asti Theatre Festival, our esteemed performer has built a strong reputation for his dynamic live shows and warm personality.

Incorporating a wide range of skills into his 45 minute magic shows, each performance includes:

It is the combination of magic show and circus skills that make our performer truly unique. The playful unison bring fun and anticipation into every illusion show and encourage laughter from the moment the curtains come up. Ideal for corporate functions, gala dinners, cruise ships and festivals, our magic artist also performs as a close up magician. Mixing and mingling with guests for up to 2 hours at your event. A great option for trade shows and wedding receptions, our lively performer is the perfect ice breaking entertainer for any networking occasion.

Top Tip:
Our magician can be booked as a duo with a fantastic female magician

Having performed at some amazing events such as Glastonbury Festival, Cirque Bijou and Edinburgh Circus Convention, as well as for high profile clients like IMAX and Wal-Mart, our experienced circus artist knows exactly how to captivate any audience. If you would like any more information about booking an amazing illusion show from our talented performer for your event, don’t hesitate to contact us at Scarlett Entertainment today.

" Everyone really enjoyed the show and I'm sure we will be working together again. Thank you! "

" Thank you again for such a great performance it was enjoyed by all. It was a special treat! "