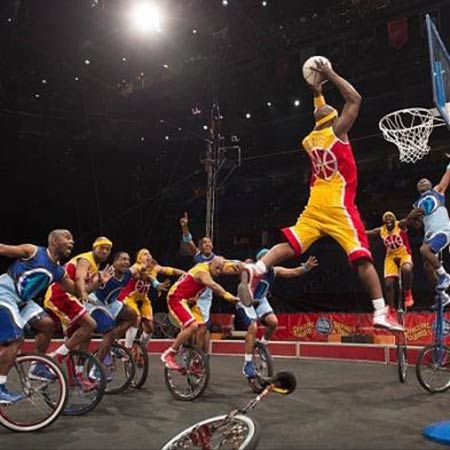 Wizardry performed on the one wheel.  A dazzling display of agility, balance, and high-speed hilarity perched atop the unicycle. These basketball Illusionists create a flurry of fast-paced fun.

The Unicycle Basketball Troupe is a group of young men out of the Southeast Bronx, who display an unbelievable game of high-extreme basketball on unicycles. The Troupe exhibits skills ranging from slam-dunks, dribbling, passing, jumping rope, to acrobatics. They’ll keep you on the edge of your seat with their hilarious high-jinks and comedic antics. Their extraordinary riding ability and world-class skill never cease to excite audiences of all ages.

Their brand of fast-paced basketball and comedy continue to be an enormous favourite with audiences of all ages. Witness the game of basketball like you have never seen before. To be entertained is to see the Unicycle Basketball Troupe on stage taking the art of unicycling to another extreme level.