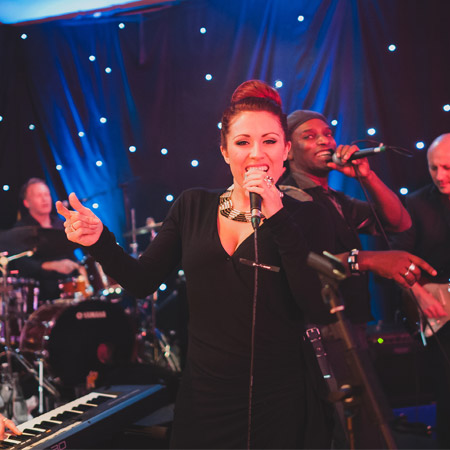 High-end live party covers band brings together different musical and cultural influences to create an amazing performance that will have all your guests up and dancing! Dedicated to performing electric versions of the world's most legendary hits, this modern cover band are industry leaders for their professional music sets. They have toured extensively, performing for the likes of Richard Branson, the Guinness Family, Joan Collins and Harry Enfield, in addition to numerous corporate clients such as Glaxo Smith Kine and Reuters.

This spectacular live event entertainment is renowned for having a varied repertoire and versatile line up. The group perform their own distinctive versions of Motown, soul, funk, disco, reggae and pop classics including artists like Marvin Gaye, Diana Ross and Amy Winehouse. They can be hired from 4- 12 members, offering both male and female vocals, keyboard, bass, drums, guitar, sax, trumpet and saxophone.

Able to vary their set list depending on each client's event or venue type, Urban Party Band have a show-stopping set making them the perfect corporate event band or wedding band. Also suitable for private parties, functions or special occasions they have been praised for their flamboyance and energy so prepare to move because you won't be able to stop dancing when this party band take to the stage!

" Everyone loved the band so much, we had people mention that they would be happily go and watch them in a big music venue. "

" You were amazing Friday night, everyone was saying what an amazing night it was... so I guarantee Denplan will use you again. "

" [They] made the evening, really. You are such a professional and slick band with so much energy... "