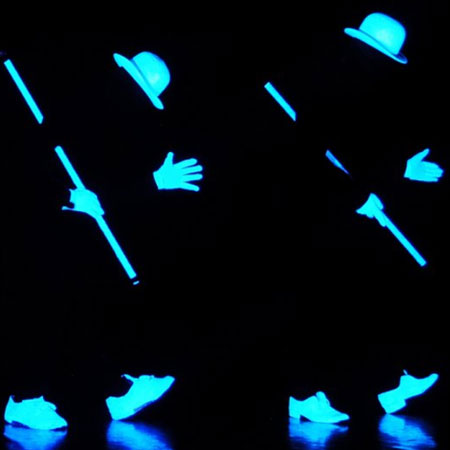 With the use of ultraviolet light (UV or blacklight), a totally darkened environment and their specially designed props and costumes, they create beautifully surreal performances that take your audience on a uniquely sensational audiovisual journey. These shows are a kaleidoscope of living colour, fantasy characters and artistic performances guaranteed to mesmerise people of all ages. All five different Maya Moon shows can be booked separately or in combination with each other.

D.N.A.
The explosion of on-stage imagery swirls like a lucid dream, entrancing your audience in a vivid web of light in motion. D.N.A.’s hypnotic ‘colourscape’ has a surreal quality rarely seen in performance – transcendence into another depth of reality. The achievement is a mystery - their artists are never seen, their presence is merely perceived. D.N.A was their first and is still one of their most popular UV shows.

Waterworld
This stunning underwater fantasy combines the graceful motion of aerial silks, ribbons, artistic dance and adagio acrobatics with a blend of breathtaking costumes, masks and flexible, elegant gymnastics. Audiences are immersed in a scene of liquid beauty at its most tastefully divine. Their Waterworld characters are a guaranteed crowd favourite and the performance is perfect as an individual showpiece, part of a ‘four elements’ theme or a larger Maya Moon show.

Avalon
The animated world of elves, pixies and mystical creatures is delightfully brought to life. Gymnastics, dance, adagio, comedy, juggling and illusion are merged with lovely fantasy costumes, acrobatic highlights and humorous antics. Certain to bring wonder and smiles to people’s faces, this is uniquely novel acrobatic mischief at its most playful. Their optional stage set makes the show even more fantastically surreal.

Silk Flames
Silken scarf dancers convey the fiery nature of light in this movingly choreographed dance showpiece. Ultraviolet light, gymnastics, contemporary movement elements and flaming silk props are blended into a show of synchronised beauty. This light and costume-based performance delivers the impression of ‘cyber-fire’ and is the perfect impact for locations where real fire is prohibited.