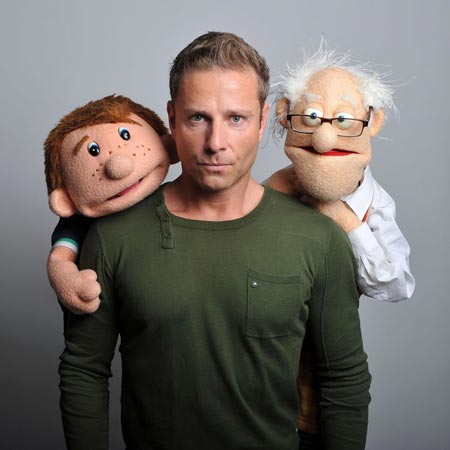 REASONS TO BOOK
Hilarious stand up comedian and ventriloquist Paul Zerdin boasts a brilliantly funny performance that is a hit with audiences of all ages
Zerdin made his first TV debut as the first outright winner by over 100,000 votes of LTW’s Big Big Talent Show
This America's Got Talent Winner can be booked for stand up comedy, cabaret, awards host and MC and compere
Winning combination of technical skill, hilarious ventriloquism, charm and impeccable comedic timing is perfect for corporate events
Based in London and available for worldwide bookings
Speciality and Novelty Acts, Unique Acts, Presenters,Comperes and Event Hosts, Speakers and Hosts

Stand up comedian and ventriloquist Paul Zerdin has entertained audiences all across the globe with his hilarious ventriloquist act that took the world by storm when he first entered the spotlight over 20 years ago.

Following his Las Vegas residency at the legendary Planet Hollywood with his hit show “Mouthing Off” and a starring role in the celeb-studded London Palladium pantomime Cinderella, America’s Got Talent Winner Paul Zerdin has returned to the UK for his exciting new tour “All Mouth”.

Paul made his TV debut in In 1996 as the first outright winner by over 100,000 votes of LWT’s The Big Big Talent Show, hosted by Jonathan Ross. Since then he has appeared on countless TV shows including Comedy Central’s The World Stands Up, ITV1’s Comedy Rocks with Jason Manford, Tonight at The London Palladium, The Princes Trust Gala and three appearances at The Royal Variety Performance!

His auditions for America’s Got Talent captured the heart of the nation and have racked up millions of views on YouTube. Currently developing TV projects in both the UK and the US, this comedian is perfect for all audiences.

In addition to his UK tour and ventriloquist acts Paul can be booked for:

Perfect for entertaining large crowds as well as intimate groups, Paul Zerdin boasts an act that is hilariously playful and guaranteed to impress audiences of all ages.

To book stand up comedian Paul Zerdin for your event, contact our Entertainment Specialists.