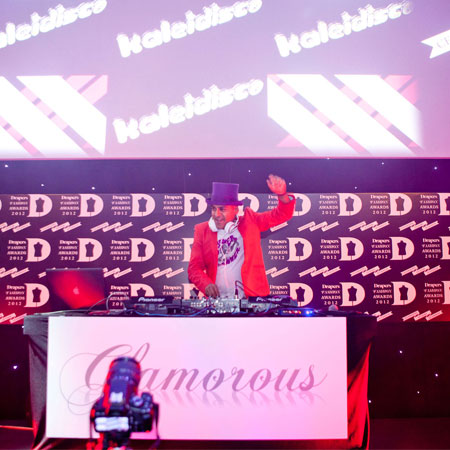 Sam is a special events DJ to the most stylish and exclusive events worldwide.  A professional DJ for the last 15 years he has extensive experience in creating a soundtrack that will suit virtually any crowd. Due to his unique musical adaptability and sheer love of good music he has been continually in demand and this in turn has led to him playing to some of the most prolific and beautiful people in the world!

Sam has also spent much time learning the art of VJ’ing to be able to bring the music he plays to life with colourful motion graphics.  A VJ using the latest high definition technology will make your corporate event, product lunch, film premiere or private party visually stunning and memorable!

He has now created a Video DJ show where he is DJ’ing and VJ’ing simultaneously mixing songs and high definition visuals (company logo’s and video addition also possible) to create a stunning audiovisual show!

‘Characteristics of VJing are the creation or manipulation of imagery in realtime through a midi mixer to entertain an audience, in synchronization to music’

The show, when launched at the beginning of 2012 was snapped up immediately by Bentley for the launch party of their new Continental V8 supercar in conjunction with Bouji nightclub.

On the night Sam mixed up-tempo dance music with colourful motion graphic visuals; the promo video of the car driving along the French Riviera and the Bentley Logo to amazing effect.

" How can I thank you enough for doing such a grand job at the Charlies Angels premiere. The whole night was phenomenal and the music was absolutely spot on. The girls (Lucy, Cameron and Drew) were the last to leave which was great for us as they said they had so much fun. I will recommend you for all our parties in future. Once again, many thanks "

" Thanks for playing for me at my birthday party, you made the ocassion for me. Everyone had such a good time and the music was just one absolute winner after another creating a perfect journey. "